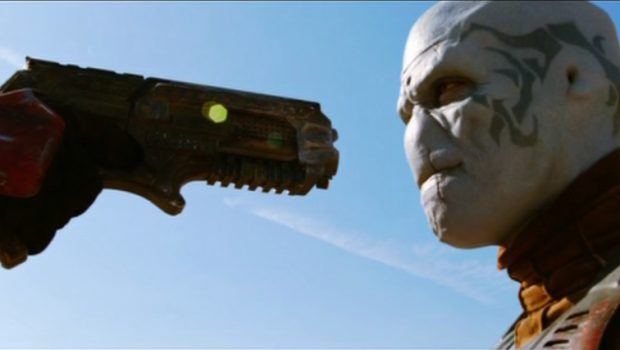 Sandy Collora began his movie career working in special effects, alongside such legends as Stan Winston, Rob Bottin and Rick Baker, before directing the phenomenal short Batman: Dead End (which you can view here). His debut feature, the inventive low-budget SF flick Hunter Prey, is out now on DVD. “Nothing is played to the cheap seats or for a stupid giggle,” he tells Matt McAllister.

What was the initial inspiration for Hunter Prey?

I just wanted to make a movie that payed homage to the sci-fi films of the ‘70s and early ‘80s. A character driven film, that also included all the things I love about a good genre film: aliens, spaceships, big guns, exotic locations etc. I was very limited in what I could achieve because of the very low budget, but I wanted the film to have the look and feel of something that was made in 1978.

What would you say were some of the influences on the film? There are shades of Star Wars, but it also seems to recall Enemy Mine, comic books and spaghetti westerns…

I always loved The Naked Prey and Hell in the Pacific. I actually think the latter was the inspiration for Enemy Mine, which I also liked, but thought was very cheesy. I wanted Hunter Prey to be a very serious film and take itself and the subject matter very seriously. Nothing in the film is played to the cheap seats or for a stupid giggle.

Many filmmakers are deterred from making low-budget SF these days and prefer to stick to low-budget horror. Was it difficult to make a film like this without millions of dollars?

They’re deterred from it because it’s much, much harder than doing horror on a budget. Horror films today especially are much more formulaic. They’re all based on the scary sound effects, aggressive, flashy editing, excessive gore, or the token kid with the white eyes.

Doing a sci-fi film for under a half million dollars is a very difficult undertaking. Making a good one for that budget is pretty close to impossible. I’m fortunate to have a background in creature design and special FX make-up, so I know how to achieve certain things on a budget, and can do a lot with a little.

It feels pretty epic despite the low budget…

Hunter Prey feels epic, because I was able to get the most out of every single element available to me. The locations, the make-up, the costumes – I was very involved in all those aspects and combined them to make a film that looks way more expensive than it really is. Not a lot of filmmakers these days can do that. I’m a very “hands on” director, which unfortunately is kind of becoming somewhat of a lost art.

I just make my films the way I know how to make them. I’m an artist, I’ll always be an artist. That doesn’t mean that I don’t want to make films that are commercially successful or appeal to a broad audience; it simply means that in whatever project I take on I will strive to make the most beautiful and visually stunning piece of entertainment I can.

The characters and narrative feel part of a believable wider universe. Do you have any plans to return to the world of Hunter Prey?

I’d love to. Unfortunately, that isn’t up to me.

Have you been pleased with the reception to the movie so far?

Absolutely. The hardcore sci-fi fans are really embracing the film, and loving it for all the reasons they’re supposed to love it. The film isn’t for everyone, but in this particular case, given the budgetary constraints, I didn’t make it for everyone.

As you’ve mentioned, your background is in special effects. Did any of the films you’ve worked on have a particular impact on your career?

I’d have to say the biggest influence and impact was working for Jim Cameron. I worked on The Abyss and also did some concept sketches and paintings for Spider-Man, back when he was going to do that film. Simply put, the man is amazing. Watching him work – his attention to detail, his uncanny eye, his overwhelming knowledge of all aspects of the filmmaking process – it inexorably inspired me. I wanted to be like him. He’s a genius and I think he’s found a way (much like Spielberg did in the late ‘70s and early ‘80s) to tap into that central core of being human, that just makes people relate to his films and fall in love with them, flocking to the cinema to see them over and over again.

Avatar is living proof of that. People say the story has been done before, or it’s hackneyed – well, to a degree, that’s correct, but even though you might know where the story is going, or how it’s going to end, you’re STILL loving the movie, laughing, crying, feeling all the way through. THAT’S the sign of a master storyteller! Even Titanic – you know how the story is going to end! The ship hits the iceberg and sinks! But the way he tells the story and handles the characters is so brilliantly done, it’s almost mind-boggling. Box office numbers don’t lie!

Your short film Batman: Dead End proved insanely popular. Where did the idea for that come from, and any plans for further monster mash-ups?

I just wanted to see the Batman I loved from the comics come to life. Batman Dead End is the past. I’m all about the future…

With that in mind, what’s next for you?

To make a better film on the next one, whatever that may be, and grow as a filmmaker. To try to be more like my hero, Jim Cameron…

Hunter Prey is out now on DVD (region 2).