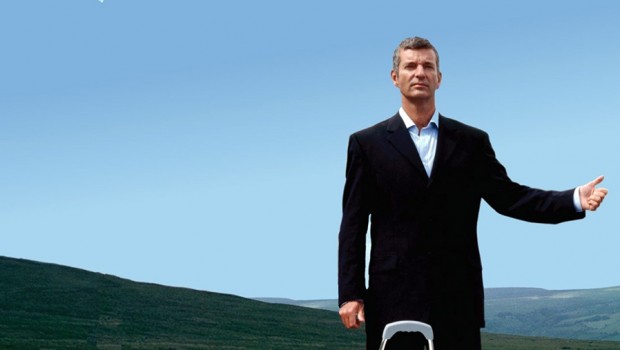 Comedian Tony Hawks adapted his own best-selling book, Round Ireland With A Fridge (2010) into his first film. Starring himself as himself, it’s about his efforts to hitchhike around the Emerald Isle with a kitchen appliance for a drunken bet. Taking first prize at the 2011 Festival du Film de Boulogne-Billancour in France, the film was nominated for best comedy film at Japan’s Okinawa International Film Festival. He recently finished shooting the adaptation of another of his books, Playing the Moldovans at Tennis.

Did you imagine a film so deeply rooted in British and Irish humour would win awards and nominations in places like France and Japan?

Not in Japan, but it was really well received. I’d be told by French friends who had seen clips that this was a film that the French would love.

How far back does your working relationship with director Ed Bye go and what were the key considerations you discussed when adapting the book? Presumably, it’s a more difficult narrative arc to create.

We met in the early 90’s when Ed came to a comedy club and asked me to do the warm ups for a new series called Red Dwarf. I then played various roles in the many series that followed. He liked the idea of this project and felt that its positive mood would come at the right time. It was a long process adapting the book – and so difficult to know what to leave out ….

Is it strange adapting a film starring yourself, from a book adapted from real events, which in turn have always have been filtered through your comedian’s awareness of their comic potential?

Yes, it’s odd. But like a lot of things, once you start it, you just get on with it. It then takes on a kind of normality by dint of how often you’re doing it. And I was involved in it every day of my life for some time.

How far is Tony Hawks from the one portrayed in the film and do you think you were kind/true to yourself?

The Tony at the beginning is not how I was. He doesn’t particularly like Ireland or the Irish. But he changes as the film develops. We felt this was needed for the dramatic arc. It’s kind of like me in a bad mood.

Do you think such a personal film makes for a tougher or easier introduction to filmmaking?

Probably tougher. But at least you know your subject matter.

Do you think of yourself as a “caper comedian” or a “quixotic comic” in the manner of say, Dave Gorman, Danny Wallace, Alex Horne or Tim FitzHigham? Are you worried about being pigeonholed as such?

I’m happy to say that I’m not worried about anything! Life is too short. The media like to pigeon-hole but there’s usually a way out of it. Glenda Jackson did OK.

The film features stand-ups Ed Byrne, Sean Hughes and Brendan Dempsey. Given that you were playing yourself, do you have any thoughts on the limitations of comedians as actors and the ways in which they bring something extra to comic roles?

Well I think a lot of comedians are good actors. A lot of people who do other jobs are probably good actors. There’s snobbishness amongst some ‘actors’ that they’re the only people who can do it. Plus comedians really understand the comic timing and bring humour to the part – as do good actors.

In terms of scenery and the friendliness of the natives, the film is a fine advert for the Irish tourist board. Did you get any assistance from them?

Regrettably, no. But it’s not too late to ask for money to help market the film further afield. It’s just I read somewhere that Ireland isn’t rolling in money at the moment.

Why did the film never get a UK theatrical release?

A disastrous one that we prefer not to talk about. We may have another go in the future – especially if we keep being so well received in foreign markets.

Was adapting and shooting Playing the Moldovans at Tennis a markedly different experience?

Yes, in that it involved shooting in London, Moldova, Belfast and Israel!

Was it the same production team and what have you learned since the first film?

Not really. I funded this film myself and all proceeds are going to go to the childrens’ care centre I started in Chisinau, so we had to use hungry young film-makers, and of course the crew in Moldova were Moldovan.