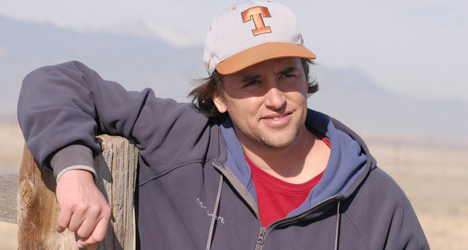 Richard Linklater, Orson Welles and William Shakespeare: not three names that usually come up in conversation together. Linklater is a prolific director who has managed to forge an enviably balanced career of indie hits like Dazed and Confused and Before Sunrise with more mainstream successes, notably School of Rock starring Jack Black. But his isn’t the first name that springs to mind when considering who might direct a film focusing on Welles’s Mercury Theatre production of Shakespeare’s Julius Caesar in 1930s New York. So it’s refreshing to report that Me and Orson Welles, Linklater’s latest film, does exactly that, and to great success too. It’s warm and witty, pitched at just the right level to engage Welles’ aficionados and newcomers alike, and it boasts a standout performance from newcomer Christian McKay as the big man with the big cigar. As well as McKay, the film stars High School Musical’s Zac Efron, another eyebrow-raising name in such hallowed grounds of film history. We spoke to Linklater about how this unlikely troupe came together and the experience of making the film…

What was the initial appeal of this film for you?

The book by Robert Kaplow is a wonderful historical fiction, a recreation of that moment in Welles’s life, seen through the young guy’s eyes. It was just a very charming book, and as a filmmaker, that depiction of Welles at that moment was a real challenge.

With a title like Me & Orson Welles I’m guessing the film must have hinged on finding the Orson Welles?

I wasn’t gonna do this movie if I didn’t find the right actor, but I didn’t have anyone in mind, as it’s such a hard part to cast. I remember theorising to my colleagues back in the US, “you know who our Welles is? He’s probably on stage in London doing Shakespeare right now, some guy who has a resemblance to him, that’s who we have to really look for”. And about 5 weeks later I get an email – this guy’s doing a little one-man show in New York. And the fact that Christian is unknown was even more magical, because you’re not sitting there judging the actor; it allows you to feel more that you’re hanging out with Orson Welles in 1936. I think that can be wonderful when it happens, and particularly with a personality as big as Welles, it’s only better that Christian is fresh.

How did Zac Efron get involved? Was it difficult to get him in a smallish movie?

Well, he played a supporting role in Hairspray, and I think of he and Christian as the co-stars of the movie; it’s his movie. But anyway, I heard he liked the script a lot, and I wanted to meet him. And I sat down with him, and less than 20 seconds into our conversation I knew I had found my young Richard. I go by my instincts, and he had all that innocence, and yet he’s really smart and knowing – he fit the role perfectly. I didn’t want a neutral character who would just disappear. He had to go toe to toe with Welles, and I think Zac is a worthy opponent, he maybe out-duels him there for a second in the movie. And Zac has that quality. I think he’s a real star.

So from such an American story, how did you end up filming on the Isle of Man?

We’re all nomads as filmmakers; you go where you can make your film. If you go to West 41st Street now in New York City, there’s a huge office building there and you would never know what it used to look like by its modern standard. And it’s too expensive to shoot there anyway, so as a filmmaker you just see where it might work. And in the Isle of Man they had this beautiful old theatre, the Gaiety Theatre, built around the same time as the Mercury Theatre. I visited it, and the stage was the right dimensions, they had that wonderful understage area so we could make that work. And that allowed us to shoot half the movie there, because half of it was inside the theatre. I didn’t need their beautiful scenery, which I think is why most people go to the Isle of Man to film, but us being in the theatre allowed them [Isle of Man Film] to be the main producer on the film. Every film is a bit of a puzzle to piece together, so I felt very lucky to be over there.

Did you organise directing the play within the film separately from the period aspect of the film?

They are two separate elements, you have to approach them differently. In one they’re putting on a play, it’s Julius Caesar, you have the exact text. That’s its own production and then there’s all the rehearsals that are leading up to it. So that was the big challenge for me. There were a lot of notes, which helped, as I was recreating a historical production, so that gave me some grounding, and I worked with a wonderful Shakespeare dramaturge from the Globe Theatre, Giles Block, and he helped me enormously. We shot all the stage elements first and then we came over [to Pinewood] to do the rest. So as they walk up the aisle and out the door, we cut to four weeks later at Pinewood studios and they’re walking through a little façade. It was a puzzle that had to be pre-planned.

Had you ever directed any Shakespeare before?

Not technically. When I was 12 I directed our Junior High production of Julius Caesar, believe it or not. I think I had about a 180-degree different interpretation of the play than Orson had – you shouldn’t kill Caesar! Those are bad guys – but there you go. It’s kind of a joke, but it’s funny looking back in your life and you can connect the dots. Even then as a kid I didn’t want to audition as an actor, but felt that I should be working with the sets, and working with the actors and costumes and staging; I should just be in charge!

Jools Holland and Eddie Reader feature in the film’s live band sequence. How did that come about?

Some of my favourite moments really in this whole process were sitting in Jools Holland’s living room, listening to him play. I’d been introduced to him and we had this live performance section, and he loves this period of music; it was just this wonderful collaboration with him and his band. And he brought Eddie Reader on board, so the music was just a joy to work on.

The industry has changed so much since Welles’s time – can visionaries like him stil exist, or are independent filmmakers like yourself always at the whim of number-crunchers as opposed to artists?

Well I think yes, you are in that position in terms of getting your film green-lit. That’s the hard part, but once the film’s financed I’ve always felt this incredible amount of freedom and support, whether from a studio or whoever’s producing the movie. I mean, there’s always limitations; budget, schedule and you’re under a certain deadline, so those are obvious pressures. But I’ve never felt accountants or anyone interfering with a movie. I think people make a bigger deal of that than there really is.

Me and Orson Welles is released on Friday 4th December.