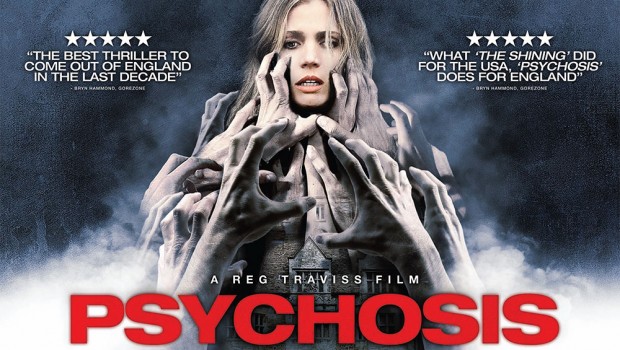 British director Reg Traviss has followed up his ambitious WWII drama Joy Division with the new retro-horror Psychosis, which sees an American writer (Charisma Carpenter) plagued by ghostly visions in a Somerset country house. The filmmaker, who has recently been photographed in UK tabloids with singer Amy Winehouse, talks to Matt McAllister about Hammer Horror, real-life ghosts and London’s Wild West…

Your last film, Joy Division, was a fairly serious story about espionage and World War II. Did you deliberately want to do something very different for your next movie?

No, not deliberately. I’d had the idea for Psychosis for some time, before Joy Division actually. I’m a fan of Hammer Horror and Tales of the Unexpected, and I long wanted to do something along those lines.

After Joy Division, I started development work on a project we’re now looking at doing next year. It was a long developmental process, so we thought it would be good to make something tight and confined that could shoot over here. So I brought up Psychosis, and everyone thought it was a good idea, so we put it into action.

It’s based on a short film by Mark of the Devil director Michael Armstrong, is that right?

That’s right. I saw the original [which is one of the stories in 1983’s horror anthology Screamtime] in the early ‘80s and always remembered it. We got in touch with Michael and bought an option right for the story and I adapted it into Psychosis. I expanded it, so it’s very different to the original, but the core premise is the same.

Was it an easy or a tough shoot?

No, it was an easy shoot. Surprisingly! Especially compared to Joy Division, which had a much wider scope – we shot in different countries, there were hundreds of extras, big battle scenes… I don’t know if it was just after doing Joy Division that shooting Psychosis seemed easy. But the other side of the coin is that the budget was much tighter and the schedule was really tight too. But even so, it was a pleasurable shoot.

Had you always wanted to make a horror movie?

Yeah, I had – a British horror, something that felt akin to a ‘70s Hammer Horror.

It’s easy to detect the influence of Hammer Horror on the production – the lighting, the grainy look, the zooms…

Absolutely. I thought it was really important [to have the ‘70s British horror look] all the way through – from the kind of lenses we were using to the camera moves and the sets. Though I didn’t want it to feel too stylised either, otherwise it can affect the story.

Saying that, the first 15 minutes feels like an ‘80s slasher…

Yeah, I know! You’ve got a bunch of these crusties out camping being bumped off by this maniac… That [slasher element] might have been my other personal tastes seeping through. But it’s also appropriate to the story I think.

I heard it was filmed in a real haunted house in Somerset, is that right?

Yeah. The house has a lot of history. The first part was built in 1492, and over the centuries it’s been a stately home, there was some civil war activity there, it was a monastery… and they tell me one of the last witches in England was also burned in the grounds! In the early 18th century, there was also an exorcism in the house, and we saw the markings related to that on one of the stone fireplaces. The fact we were shooting in a supposedly haunted house in the middle of nowhere massively added to the atmosphere!

Did you ever see anything?

I never saw anything, but other people did. One of the crew members, who was staying in a wing of the house that was supposed to be particularly haunted, heard knocking on his door every night. And one of the runners was in a bedroom by herself one day and a woman said “Hello” to her.

Also, we were getting all these dailies reports. One day the loader said the lab told him that the previous lot of rushes were all fine except that the woman standing next to the fireplace was underexposed. I thought, “What the bloody hell’s that?” We never got to the bottom of it. When I got back to London I went straight to the lab and asked them. But we never found that image again…

Psychosis stars Charisma Carpenter. Was she chosen because of the horror connotations from her role in Buffy and Angel?

A little bit. In the original short the character was English, but I wrote her as an American because I wanted this sense that she was a fish out of water. We looked at a lot of American actresses, but Charisma on a creative level completely understood the character. She’d read the script upside down and back-to-front, had 70-odd questions for me… I felt she knew the character as well as I did!

But of course you’ve always got to consider what people have done before, because they bring some of that to the film. I thought the fact she’s known for Buffy and Angel was a good thing – she brought this American pop-culture horror element to our creepy British Hammer-esque film!

The film features a surprising cameo from Justin Hawkins from The Darkness. How did that come about?

Well, there was a rock musician character in the script and we just thought shall we see if we can get a real musician for the role? So we went out to a few people, but Justin just seemed to be bang up for it.

He likes horror and all of that, and as with Charisma, I thought Justin would fit into this genre. I also felt that he and Charisma would compliment each other in a way fans of horror would appreciate.

You’re currently dating another musician, Amy Winehouse. Would you consider casting her in a future movie?

I’ve never discussed anything like that with her. I do always think that musicians have the potential to work well on a dramatic level because they’re performers. But, no, I haven’t really thought about it.

Let’s talk about your upcoming projects. We’ve heard you’re preparing to work on a gangster film entitled Jack Spot: A Man of a Thousand Cuts, is that right?

Well, actually I’ve just been brought on to direct a prison thriller called Screwed, based on a bestselling book of the same name. It’s based on a true story about a prison officer and corruption within his prison. It’s a really good, original thriller. We’re in pre-production on that, and will shoot at the end of the summer.

Jack Spot is a project we’ve been developing for a while. It’s just going through the finance stages at the moment. That should be ready to go early next year after Screwed. It’s a much bigger film – even bigger than Joy Division, so it’s taking a while to develop properly. But that’s also based on a true story, about a mobster between the ‘30s and ‘50s in London. There were gangsters and a prohibition on gambling – it mirrored a lot of what was going on in Chicago and New York at the time. The city had a Wild West sort of environment!