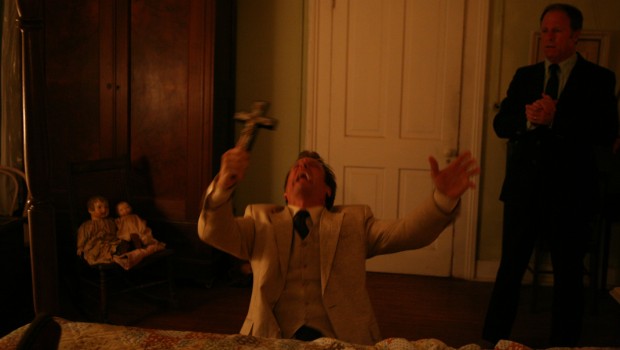 Patrick Fabian has popped up in dozens of TV shows and movies over the last 18 years, taking in everything from Millennium and CSI to Friends and Will and Grace. “I’ve guest starred myself to death!” he admits. Fabian can currently be seen in his most prominent role to date as charming preacher Cotton Marcus in the box office smash The Last Exorcism. Fabian – who in real life is as chatty and charming as Cotton himself – tells Matt McAllister about making the film and talks about his upcoming projects.

Did the documentary-style format of The Last Exorcism mean the shoot felt different to other projects you’ve worked on?

Yeah, absolutely. My character talks to the producer Iris and the cameraman throughout, but they’re not so much seen in the film as heard. That felt weird; you’re trained not to look at lens usually, and this was the exact opposite. So at first I was very self-conscious.

The great thing was that Iris Bahr [who plays producer Iris] and the cinematographer Zoltan Honti had more patience than anyone I’ve known! They had to listen to me ramble on again and again for about 12 hours a day, but they always had this expression on their faces that said, “We’re totally interested!”

Were there any other challenges you faced during the shoot?

Also, the days are long in New Orleans, and it’s not known for its air-conditioned culture. We were down in the Delta and it was hot, sweaty, buggy and muggy. So it was intense, and you get a little tired at the end of the day after a couple of weeks, but everyone kept their spirits up and their focus.

How did you prepare for the role? Did you watch any particular films or conduct much research?

Playing a priest, is a cool thing for an actor, you know? They’re showy, they’re men of words, they’re larger than life. So I did watch a bunch of films, like Elmer Gantry, in which Burt Lancaster played a preacher, and of course The Exorcist – about a zillion times!

But in terms of actual preparation, I went to Pentecostal and Baptist churches in Los Angeles and New Orleans where we shot. And I read about real life exorcisms, which was fascinating. I also got to write my own sermons – I wrote one for the audition and a couple when we were filming. It’s funny, you can Google a ‘boilerplate sermon’ online! And you can YouTube the greatest preachers of our day, like Billy Graham. I had a field day and liberally stole from the best I could find!

Your character Cotton has made a career from conning people, yet you make him very likeable and amusing. Was it difficult to get that balance right?

There is something about charlatanism and P.T. Barnum-ism that I think people enjoy. It’s not malicious hucksterism, you know what I mean? If Cotton wasn’t selling this, then the next person behind him would be selling it. So if he can sell it, what’s the harm? If there’s a problem that Cotton as an exorcist can solve, he doesn’t see a problem with making a buck on the side.

Did you enjoy watching the audience’s reaction at the film’s premiere?

Absolutely! I hadn’t seen a finished cut until that point, so I was as blind as the audience was on the opening night. I was really pleased with the reaction! Because when you’re shooting a film for four or five weeks, in your mind it becomes Gone with the Wind – it’s like eight hours long you know? But of course the director eventually cuts it down to a nice 90 minutes. So I was surprised at how tight and how scary it was.

The film begins with funny moments – it doesn’t lull you into anything exactly but it starts with a different tone. And then, as we get towards the end, there’s that wonderful moment when the audience is really quiet – and you realise they’re breathing shallowly! Me too! Even though I kinda knew what was coming up, I wasn’t exactly sure what they’d keep. I literally jolted a couple of times – which is ridiculous, because I thought, “Wait, I know what’s coming up!”

The Last Exorcism is probably your most prominent role to date, but you’ve appeared in dozens of TV shows and movies over the years. Have there been any particular standouts for you?

Well, I’m a journeyman actor there’s no doubt about it. I’ve sort of guest starred myself to death! I was thinking about this the other day: I’ve kissed Jennifer Love Hewitt, I’ve kissed Xena Warrior Princess, I’ve worked with Angela Lansbury – though I’m not going to say whether or not I kissed her! (Laughs) It’s all been a lot of fun.

I tend to play a lot of ex-husbands and a lot of pricks, guys with no heart. Maybe the camera’s capturing something deep within my soul that I don’t think I have, I don’t know! I recently got to play a really cool role on Big Love for the past two seasons, that was fun. And Xena was a cool job as an actor. I got to go to New Zealand, dress up in leather costumes… I’m not sure what job could be better!

What can you tell us about your upcoming projects Pig and The Land of the Astronauts?

Land of the Astronauts is an independent film starring David Arquette; I did a couple of days on that with him. I wasn’t really privy to most of the shoot, but it’s an LA-based story about delusion and illusion and yet again I play an ex-husband who’s kind of a prick! I’m not sure when it’s coming out yet, I think it’s in post-production.

As for Pig, we had the wrap party finally the other day after a long shoot. It’s an original script by the director Henry Barrial. That’s a sci-fi film. I don’t want to give too much away, but it has the feel of a reveal movie not unlike Memento. It looks really great, it’s beautiful, and I can’t wait for them to finally confirm a release date for it.