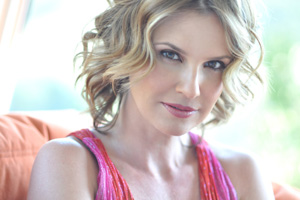 Megan Ward began her movie career in the early ‘90s starring in micro-budget SF pics for Full Moon Productions including Crash and Burn (1990), Trancers II (1991), Trancers III (1992) and Arcade (1993). She also appeared in the gloriously silly Freaked (1993) and Joe’s Apartment (1996), but is probably most famous for playing Kim Sayers in the cult alien conspiracy series Dark Skies (1997), which has now finally arrived on DVD. “The Hive might have started Facebook!” she tells Matt McAllister

Oh, it’s remarkable. This was one of those shows with a strong cult following, and I think it really holds up after all this time. I’m pleased that a second generation will see all the work that we put into the show. It’s a very compelling story, so I’m very excited.

Have you rewatched the episodes recently?

I’ve been going back and watching different episodes over the last few days. It’s funny – there are some episodes that I have absolutely no memory of! I don’t remember where we filmed them and I don’t remember the circumstances around them. But it’s been 14 or 15 years since we started filming the show; a lot of life has happened in between! I remember that the weeks were long, and it was very difficult to make. We really did a lot on that show – no wonder I can’t remember all of it! Because it was a very ambitious show, very ahead of its time. Honestly – if you look at sensational shows around now like Heroes and Lost, Dark Skies was up there, though we didn’t have as many resources as they do now. We had to do things the hard way!

It also drew on 1960s fashions long before Mad Men…

Oh, that was fantastic! But it was gruelling too, because everything had to be period – even down to my underwear! I remember the wardrobe department put me in a Playtex bra, because women dressed differently back then – and it starts all the way up from the ground floor!

The location department probably had one of the hardest jobs. The show not only took place in the ‘60s – and there was a lot of transformation over the decade of course – but it also took place all over the country. And we recreated a historical event each week, so there was actual history that we had to be authentic with. That history was one of the most interesting aspects of the show – covering the Civil Rights movement, the Watts riots, The Beatles coming to America, the death of JFK… Profound moments that changed our culture. Understanding the emotional aspects of events, rather than just the facts, was always significant for my character.

Away from the complex conspiracy theory it was also a very human story about this sweet young couple wasn’t it?

You know I think that was really one of the most important things to me. When you look back, John was really proactive and motivated by the plot of each episode, but Kim was more reflective about who they are as a couple and who they are as people. In the pilot there’s this whole explanation of how they weren’t married but were living together, which was quite significant. They were slightly ahead of their time.

Kim’s reason for that was that she wanted to find out who she was before she married him. I mean, she knew she would marry him – and if this alien hadn’t dropped into the middle of their lives, they probably would have been married within six months! [Laughs] But then this large, epic event changed them forever, and they never had the chance to have a normal relationship.

You got to work with the late, great JT Walsh on the show. What are your abiding memories of him?

We were so fortunate to have JT because he was just so talented. He came with so much experience. Both Eric [Close, who played John Loengard] and I were 25, we were just kids, and we’d worked but not on the scale of this show. And JT had such an ease and confidence – he always knew what was right and he always knew better than all of us, you know? He didn’t mess around, and I think it was very beneficial for us as actors to have him there as someone to look up to.

Your character became a very different version of Kimberley in later episodes. Did you enjoy playing a different side to the character, or was it frustrating that she changed and her story was never really resolved?

It was fascinating to see the character turn. She really was so idealistic and very hopeful. I mean, John goes through a change too – he becomes very disillusioned with our culture as society changed during the decade – but Kim really changes. That’s always a pleasure to play as an actor because it’s something new.

That being said, I still wanted her to be saved – I mean, to have her going off with Tim’s [Kelleher] character posing as Charles Manson – that’s very dark. And it was a great cliffhanger, but in the end that’s all that happened! She went off and went to the other side, and it’s sad for me that she didn’t get to come back.

Did you know what her arc was intended to be?

They wanted to take the characters up to modern times, and they really accelerated through the years at the very end. They had intended some of that to happen in the third season – I don’t know if it was intended to be in the first season anyway – but I’m certain Kim would have come back. Maybe she would have risen to power within the Hive, which would have made it an even harder struggle for her to make it back. I know the show would have incorporated more history as it brought them up to modern times. I mean, wouldn’t it be great to do a TV movie now? The Hive might have started Facebook, who knows? (Laughs)

You began your career working in movies for Full Moon Productions such as Crash and Burn and Trancers II. What are you abiding memories of those movies? Were they fun to make or tough to do on low budget?

I think both. Crash and Burn was my first movie and it was very exciting to get a lead on a movie. I had never been on a bigger budget movie, so I didn’t really have anything to compare it to. Now in retrospect, having worked on a variety of productions, I can see that what happens on a small production like that is you really have to commit and pull together. Because there’s often no second chances – you do one explosion, that’s it! Or one car chase – that’s it!

Charlie Band [director/Full Moon Productions head honcho] was really wonderful, he set me out on my career and I learnt about filmmaking on those films. He didn’t waste a lot of time. We went through 12 to 16 pages a day – on a big blockbuster they’d go through a quarter of a page. That stuck with me on every job I’ve done – it’s like a metronome inside of me saying, “Get it done!” I get bored on long shoots – I like it when you move quickly! But I do remember on Crash and Burn we were shooting at the cheapest, dirtiest locations you can imagine. We were dirty all the time, the trailer was at an angle, the whole place smelt bad. (Laughs)

Actually, it’s not so far away. Daytime television works at about the same speed of a low-budget film. I mean, daytime TV is cleaner and more civilised, but the speed is similar. There is more hairspray and more lipgloss on daytime TV though…

You’re saying there wasn’t much lipgloss on Crash and Burn?

No, we were more likely to be given scab wounds. I remember I broke out in rash all over my face on that film. I mean, they covered it over the best they could, but there was only so much they could do!

Have you got any upcoming projects aside from your recurring role on General Hospital?

I just did a guest spot on an episode of CSI. I do a lot of guest spots nowadays. I usually play ‘Mother of dead child’ or ‘Widow’. I’m in that category now! But I’m always waiting for the next adventure…

Dark Skies: The Complete Series is out now on Region 2 DVD.