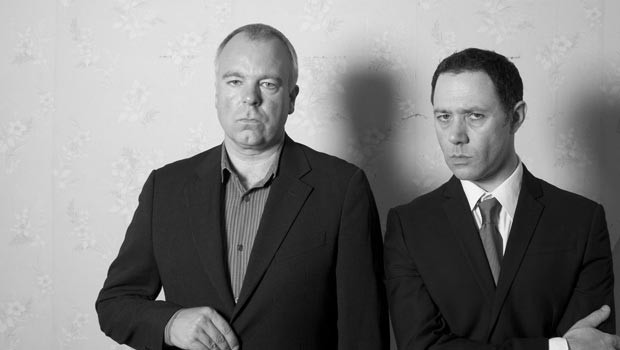 May 2, 1997, and the League of Gentlemen are giving their first television interview. They’re excited about returning to the Edinburgh Fringe and rightly so. They’ll be leaving it with the Perrier Award. That same afternoon, Tony Blair enters 10 Downing Street for the first time, swept into office on a wave of public optimism.

May 6, 2005. Blair’s back in and the League are promoting a film about world annihilation.

“There’s a lot of apocalypse in the air,” claims Mark Gatiss, the tallest Gentleman. “You’ve got Hitchhiker’s with the world blowing up, Star Wars and War of the Worlds coming out. It’s like the end of days. Everyone’s fed up with Blair and everyone’s …

“… fed up with us” laughs Steve Pemberton, the chubbiest of the Gentlemen. “But no, we’re really proud of it. People are calling it a cross between Hammer horror, the Carry On films and Monty Python. They’re obviously all huge influences and are right there in the film. But the thought that we could make some kind of contribution to British cinema like those, it’s mad.”

Maybe not. Even though Apocalypse criss-crosses three different realities, international box office success for both Hitchhiker’s and Shaun of the Dead suggests a market for this kind of eccentric British comedy exists beyond local cinemas. Besides, as the film affectionately self-mocks, theirs is an established multi-media franchise already, from commemorative snow shakers to their forthcoming pantomime tour, The League of Gentlemen Are Behind You!

“You’re not going to trick me into saying the British are coming,” states Gatiss. “But I do think we’ve avoided the twin pitfalls of adapting sitcoms, either that long shadow of Ealing and trying to make a caper film, or simply the curse of making the Are You Being Served? movie again. Without being arrogant, we were trying to make something much more ambitious than perhaps anyone had any right to expect.”

With a £4m budget, these confirmed cinephiles indulged a few of their adolescent fantasies, from casting Straw Dogs’ David Warner as their chief villain, to “getting away with two stop-motion monsters!” and endless snatches of movie quoting, including one blink-and-you-miss-it Peter Kay cameo homage to The Shining.

“Only one person in the cinema will get that,” sighs Pemberton. “But we hope that bits like that encourage repeated viewing. It’s our trick to get people coming back a second time.

“There are a lot of film references, like with The Great Escape part, but I really think it works. It doesn’t feel grafted on. It did make it triply difficult for us though, as many people will be coming to the movie with expectations, but some won’t have seen the series at all and just enjoy it as a comedy film of twists and turns. Even if they are puzzled for the first 20 minutes.”
Both actors have small roles in Match Point, Woody Allen’s forthcoming feature. But their minds are already focusing on writing a second League of Gentlemen film.

“The possibilities of what it might be are incredibly exciting,” says Gatiss. “That first time you all sit down in a room and ask what’ll we do next? A full comedy horror or something like that. It’s delicious anticipation.”

A version of this article originally appeared in the List, May 26.

Related:
The League of Gentlemen’s Apocalypse