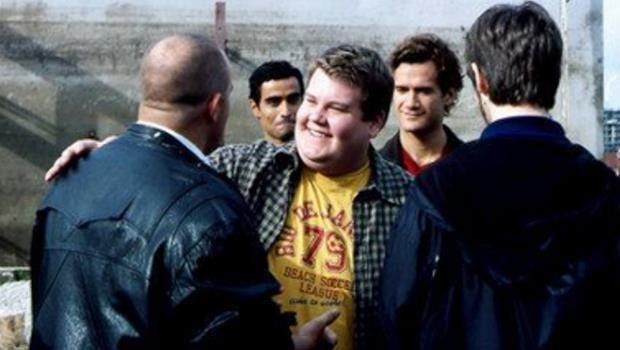 Writer and actor David Raymond was born in 1979, yet has already starred in his own self-penned feature, Heroes and Villains. A romantic comedy, the film follows four friends’ business exposing philandering spouses in London. A former investment banker, Raymond was inspired to pursue a career in film after seeing Lord of the Rings.

Heroes and Villains is your writing and acting debut. Were you prepared for the dual role?

David Raymond: Yes and no. Mark Pegg the producer, Selwyn Roberts the director and I made a conscious effort to separate the roles for me on set, so I was concentrating on one thing, and one thing only –playing Jack, my character. There were times when it was difficult but Selwyn created such an open atmosphere it was never a problem sharing ideas.

The film is said to be “inspired by the demise of a four year relationship”. How far is reality depicted and was it odd working through it on screen?

David Raymond: Inspired but in no sense autobiographical! So no, it wasn’t odd working through it on screen.

Why cast yourself in the lead role driving the sports car and chasing the beautiful girl?

David Raymond: I have a real love for film and acting, so playing the lead character was something I always wanted to do. As for driving the sports car and chasing the beautiful girl, that’s just the journey my character takes in this particular story.

The film is unflattering about the City boy lifestyle, yet you secured funding through contacts in the world of high finance. Presumably you withheld the script from them?

David Raymond: Not at all. Some read the script and some didn’t want to. The stereotypes shouldn’t be taken too seriously, it’s just poking a bit of fun. My friends from university who have ended up in the City didn’t take offence.

As a pair of relative unknowns, how did you and Mark Pegg set about finding financial backing?

Finding money for British films is always difficult. I ended up raising all the money in private equity from contacts I had in the City and elsewhere. It certainly wasn’t as easy as it sounds, for every person who says yes, there are hundreds saying no. It was one of the most difficult parts of getting the film made and often quite despairing. But at those points I’d just go to the cinema, recharge my batteries and remind myself what I was doing it for and then plough on. We actually had a large amount of money fall away during the second week of shooting, so that wasn’t easy to deal with. But we made it through.

Is the film as you imagined it or were there compromises between script and screen? Were you comfortable allowing Selwyn Roberts to direct such a personal project? And how did he feel about the writer always being on set?

David Raymond: I think there are always compromises between script and screen. Writing the script means you have a certain vision for it, as does every person who reads it from then on. So from that point and having to concentrate on the acting you have to take a back seat. It’s a director’s medium. As for being comfortable with Selwyn, there was never any question of not being so. Everyone’s always said you have to trust your director and I did. He has such a passion for film and he’s worked on some huge award-winning features, so it was more than reassuring. As for my being on set all the time, I don’t think it was ever a problem.

What were the main challenges of the production?

David Raymond: It feels like we climbed Everest to get this made, it certainly wasn’t easy. Raising the money was difficult, before and then during the shoot. As for the rest of the production, there were many challenges. But you’re making a film, so it was never that difficult even at the worst of times. Because you love what you’re doing.

Are you worried about inspiring people to spy on their partners? Can you cope with the guilt if people confront you explaining that they loved Heroes and Villains but it destroyed their relationship, causing heartache, alcoholism and restricted access to the kids? And does that matter if they enjoyed the film?

David Raymond: It’s a rom-com and only supposed to be a bit of fun. So no, I’m not worried!

How did you persuade well-known faces like Jenny Agutter and James Corden to come on board?

David Raymond: That was very much down to Mark, Selwyn and Gillian our casting director. I like to think the script had something to do with it too, but I certainly give them the credit for getting Jenny and James to sign. It was a joy working with Jenny, she’s absolutely lovely and as for James, well I think his work on this and other films out at the moment speaks for itself.

Are you equally committed to writing and acting or do you intend to push your career in one particular direction?

David Raymond: My heart is with the acting so I hope to push that forward. I’ve so much to learn and develop as an actor and there are so many characters I’d love to play, so hopefully more opportunities will come.

Can you explain a little about your forthcoming project, The Baron of Bengal? At what stage of development are you at?

David Raymond: There’s not too much I can say until things are concrete. The Baron of Bengal is the second script I’ve been developing. It’s very different from Heroes and based on Clive of India’s story that ended with the formation of the British Raj.

The cinematic references in Heroes and Villains betray your love of film. Who would be your ideal collaborator to work with and your dream production?

David Raymond: I would have loved to have met, let alone work with, Alec Guinness. Or to make a film like Zulu by Cy Endfield. My Dad was obsessed with that film, so I used to watch it at least once a month when I was a pup. I’ve recently seen The Last King of Scotland and thought it was superb, so the chance to work with someone like Kevin MacDonald is certainly something I aspire to.