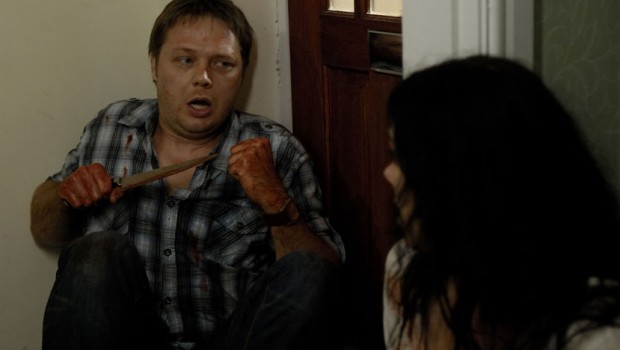 Following in the tradition of Right At Your Door and Mulberry Street, new British indie horror Salvage is a powerful study of contemporary fears. The story sees a sleepy cul-de-sac sealed off by a group of heavily armed soldiers, leaving the residents to wonder whether there’s been a terrorist attack – or if it’s something even worse. Director Lawrence Gough tells Matt McAllister about shooting his low-budget gem on Brookside Close…

Well, I’d made a short film a few years earlier that I wanted to reshape into a movie. While I was developing that, the Branscombe incident happened, and all these containers washed up on the Devonshire coast [after the MSC Napoli ran into a storm]. That gave me a great idea of a container that washes up on a coast – containing something deadly.

We were making a genre horror film, so at some point we had to raise that element. But we tried to be as smart as we could with the low-budget restrictions we had. I know it’s a cliché, but the whole ‘less is more’ thing does work. And so we had the idea of the close being cordoned off, and the people being trapped and having to dig deep within themselves.

The film explores a contemporary fear of terrorism and unseen threats, and that was worth building on. We wanted to play up that claustrophobia and paranoia with ordinary people who are caught up in something extraordinary. That’s the part of the film I’m most proud of.

Yeah, we actually really wanted to have a snow-filled close and play up the Christmas thing! In my mind we didn’t quite nail that aspect in the film due to the budget and the fact were shooting in February. But it would have been interesting if we had subverted the Christmas element more. In the film we just included a few decorations and the turkey wrapped up in the kitchen. Mind you, that’s quite realistic for a Christmas in the UK isn’t it? (Laughs)

I actually made In Cold Blood after Salvage, and I’m doing a couple more of those. But I think that low-budget filmmaking forces you into that world – using handheld cameras, natural light and real sets, things like that – rather than it being a deliberate thing. We were trying to get a sense of realism into a horror film, and I think those things added to it.

Did the low budget lead to any particular challenges? Or was there anything you weren’t able to realise because of the lack of money?

The challenges were there, without a doubt. But they weren’t overwhelming because I came from a short film background, and that helped. I also think if you’ve got a story worth telling, you can find a million ways of telling it, and it doesn’t rely on money. We had a good story that it was possible to tell within the budget.

The worst thing that we had to lose was a prologue that would have started on the beach. Some kids wake up from a night on the beach, huddled around a smouldering fire. They come across this container that has washed up, open it up and get ripped apart by an unseen force. In the film we had to do it as a news report rather than witnessing it directly. That was the biggest compromise as it was deemed something that would challenge the budget.

Salvage is filled with moments that have a real emotional impact. Particularly the scene where Jodie refuses to let her mother into the house…

That was paramount. The camera would find the actors, rather than the actors finding the camera – the characters were key, and the way the film was designed and lit helped to create a sense of reality, of how we would act in our own homes.

I feel that the actors and characters are often forgotten in low-budget horror films. The driving force of this film was the mother, a flawed character, as we all are, who has issues in her life. And the very thing she’s running to – her daughter – is the very thing that rejects her. I felt that was more important than the monster. And of course the salvage, the container, is a parallel for what the mother becomes.

Did your background as an actor help in getting such intense performances from the cast?

It’s a cliché, but they knew I’d be on the shop floor with them. I had that acting background, so I understood where they were coming from rather than just saying, “You sort yourself out.” From rehearsal to shooting, everything was about finding the right way to express these characters.

That came from the actors and myself working together in the space. That was the blessing of Brookside Close, where we filmed. We took it over, and I was able to go on set and walk the actors through the entire story – the film was designed so that you could almost go from the beginning to the end in one take.

How easy was it to get the film off the ground?

I got funding for a few of my shorts, and I then made the decision to make a feature film. I remember to start with I was wondering “How am I going to do this? Am I deluding myself?” But instead of focusing on that, I worked on the story idea.

The money was then dropped in by organisations I could apply to – BBC Film Council, North West Vision and Media and Liverpool City of Culture. I had an idea that could be made for the budget, but there were months of pitches and meetings. I think – and I can only say this in hindsight – that they saw where we were coming from, which gave them confidence. I think they liked our ambition and that this wasn’t just an arthouse piece but had a commercial aspect. I mean, I hold my hands up, I want to do genre films…

So you’re happy with the label of ‘genre filmmaker’…

I think so! I think horror has a bad name from all this torture stuff, but I’m a horror traditionalist. I think horror’s got a hell of a lot of worth in its link to the psyche of an audience. Good horror, like George Romero’s work, embraces contemporary issues of the time, and I think we did that.

That’s something we’re doing with the next film, an ecological horror called The Drought, which is about a drought in the UK. That again embraces the fears we have in 2010. Fears that aren’t going away.

When will The Drought be released?

We’re in script stage now, and we’re heading into pre-production, so it will be 2011 by the time we’ve got it out. [The Tournament director] Scott Mann is producing, and I think he’s great. It’s about a thousand times bigger than Salvage. I can’t say much more than that at the moment, but it’s a huge leap for me…