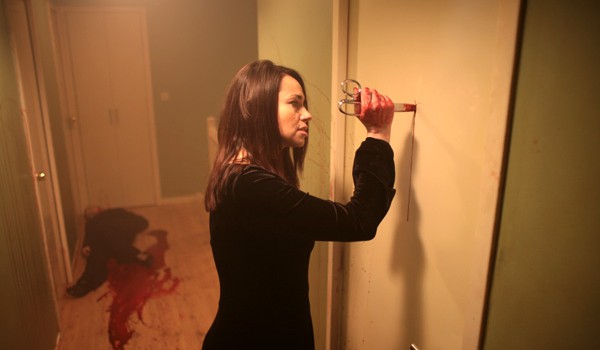 Stylish, intense and certainly not for the faint-hearted, Inside is the provocative debut from first time directors Alexandre Bustillo and Julien Maury. The story of a pregnant woman who’s stalked in her home by a madwoman with a penchant for pointy objects, it’s safe to say Inside is not a movie you’re likely to forget in a hurry. The surprisingly jovial Maury took time out to talk to Matt McAllister about the Gallic shocker…

Inside contains some of the goriest and most disturbing sequences I’ve ever seen in a horror movie. But you’ve stated that your intention wasn’t to shock…

The point is that Alex and I never set out to do the most shocking movie ever. We didn’t talk in that way. We just thought, ‘What movie would we would pay to see in theatres ourselves?’

But presumably you knew it was going to be controversial…

Oh yeah, of course (laughs). During the writing process, our parents, our family and our producers warned us, “You must be aware that you will have problems with parent groups in France and other organisations like that!” But you know, actually, we didn’t get such a big reaction. When any critic objected, it was to the movie itself – the story or the acting – not the fact that we were talking about taboo subjects. I think that people get that this is just a movie and not a snuff film.

The idea was inspired by a pregnant woman that Alex Bustillo knew, is that right?

Yeah, he wrote the first draft before we met each other. He had a pregnant friend. Her husband used to be away for work a lot, and she was alone at night in a suburban house, like in the movie. Alex just imagined what would happen if someone came to the door and tried to enter. That was our first idea. The second was to try to avoid the cliché that the villain is always a man. We thought why not make it a woman? After that we tried to figure out what would make a woman try to kill someone else.

Also, this was our first movie, so Alex and I were like kids in a candy shop! We wanted to include anything we liked in the horror genre. So that’s why there is sort of a zombie in there, a giallo-like scene, and it’s like a monster movie when the woman is burned… We were always like, “Again! Again! More blood! More blood!” So I think if there were any mistakes, it’s because we were too excited.

Were there any particular movies that you looked to for inspiration?

We were really influenced by Dario Argento, films like Tenebrae and the giallo style. But we had a lot of influences, as Alex and I are really big fans of horror and ‘fantastique’ movies. We grew up watching this type of movie! For Inside we had mixed influences; from French movies – one, not so well known, is called Death on a Rainy Sunday – and more international influences, like The Innocents with Deborah Kerr. The gothic outfits she’s wearing in that film, the black dress – that really was a strong influence on Beatrice Dalle’s appearance.

Also I would say The Haunting of Julia [aka Full Circle] with Mia Farrow, and Roman Polanski’s The Tenant – we tried to capture the 70s-style ambience of these movies, especially the early scene with Alysson Paradis in the park. Alex Aja’s Switchblade Romance [aka High Tension] was also a big influence on us too. It was the first time in France that we saw a really frightening, well-made horror movie and we felt – wow! – it was possible to do this in France!

There’s been much talk of a ‘new wave’ of French horror with films like Switchblade Romance, Frontier(s), Martyrs and Them. But I read it’s still difficult to get funding for horror movies in France…

Definitely. This ‘new wave’ is not really a wave, they’re more separate films. It’s really hard to find funding because the movies you’re talking about like Frontier(s) and Martyrs – they’re not big hits at the box office here. They’re not flops, but the audiences are always fairly low.

So producers are like they are anywhere in the world – they’re not going to invest more than €2 million, so that’s the budget more or less we all have. For Inside it was €1.7m. It’s hard in France to make these projects… That’s what we’re trying to do now, it takes a long time!

It’s usually really hard – yet it wasn’t that difficult for us! We are really an exception. As you say, Inside is a hardcore movie and it’s not supposed to be a blockbuster. It was a question of being in the right place at the right time.

When I first met Alex, he gave me the first draft of Inside and I gave him one of my shorts, and we said, ”OK, let’s try and do it together!” Our agent gave us the number of the producers, and that was it. They called Canal+, and they said “Let’s do it!” They weren’t afraid we were beginners, and that was astonishing! We tried not to disappoint anyone as they trusted us. But since then we’ve became friends with a lot of French directors, and everyone says we couldn’t make a movie like Inside today. We were really lucky!

How is it working as a directing duo? Do you split the duties in a certain way?

Alex and I haven’t been friends for 20 years or anything like that – we’ve only known each other for five years. But we shared everything since the beginning of Inside – from the writing part, to the directing of the actors and crew. We used to do really heavy preparation before shooting. We did all the storyboards ourselves, we worked out all the sequences beforehand, so on the set we really made the best of our time.

We knew that if one of us was talking to the DP and the other to the actress, the other didn’t have to come back afterwards to check what was said. We really trust each other, and worked really fast like that. In all that time we didn’t have any arguments (laughs). It’s the perfect way to work. We split the stress, and shooting a movie is really stressful, especially as this was our first! We had to fight with producers, fight with everyone, but the fact there were two of us was really a strength. It was two of us against the world!

There has been discussion of a remake of Inside, and [Rec]’s Jaume Balagueró has apparently expressed interest in it…

Well, firstly, Hollywood offered us the chance to remake it ourselves. But we declined it, we said no way. It’s pointless, we’ve made it once! After that we heard that Mr Balagueró wanted to remake it. He saw the movie at Sitges festival. He was giving a talk there, and he told us that he really liked the movie. A few months later, he came to us and said, “If you agree, I’d like to work on a remake of it.”

We were really excited because it was the opposite to how remakes are usually done. It’s usually the younger director remaking the movie of a really famous director. But here Mr Balagueró was going to remake the movie of two poor French unknown directors! We’re really big fans of his work, so it was terrific! But as far as I know, it’s been delayed and I don’t know if he’s on the remake anymore. I know he worked on it for a few months – he has written a script I think – but I don’t know any more than that!

Talking of remakes, you were tied to Halloween II and Hellraiser for a while. Are you tempted to make the jump to Hollywood? A lot of French directors seem to have lost their creative freedom when they’ve done this – I’m thinking of David Moreau and Xavier Palud with The Eye, Alexandre Aja with Mirrors, Xavier Gens with Hitman…

You know, that’s why we haven’t made a second movie. It would be really easy for us to do a second movie in Hollywood, because like every other young director in the world we receive about 25 to 30 scripts a week. But Alex and I are not willing to do movies at all cost. We just want to build something, to express what we have in our minds. We have a lot of stories to tell, we don’t want to spoil that by becoming ‘yes men’.

But, of course, we are not stupid – when the Weinsteins offered us the chance to work on the Hellraiser remake we thought, ‘OK, let’s see what happens.’ We read the script, but couldn’t come to an agreement. Because we didn’t have the same attitude as the producers. They want to do these teenage movies that are always the same – there are 10 movies lined up each Halloween aimed at teenagers, featuring young girls with big boobs…

A few months after that the Weinsteins asked us to come back and work on Halloween II. And though we’d said we weren’t going to go through the same thing again after Hellraiser, it was like a dream to film Michael Myers! We couldn’t say no! So we began to work on it for a few months, but then Rob Zombie came back – and compared to Rob Zombie we are nothing, so we said bye-bye!

So we decided not to go to the United States to do a remake or a PG-13 movie; we want to do original things. The battle is now in France, because, as I said, horror and ‘fantastique’ movies aren’t really popular here. The audience does exist – the Saw franchise was a big hit with teenagers – but they don’t seem to trust French horror films. They’re like, “Horror movies in France? Bah! It’s going to be two people talking in a kitchen!” It’s a pity, but they just like American horror movies, so we have to convince them. We have three projects at the moment, we don’t know which will be the first to be made. But we’re definitely going to shoot in the year to come…

Inside is released on DVD on 12 October 2009 courtesy of Momentum Pictures.