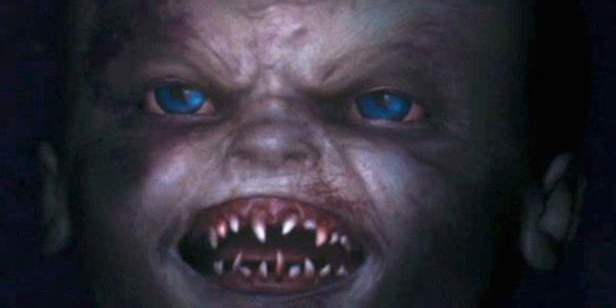 German director Josef Rusnak came to the attention of genre fans with his inventive 1999 SF-thriller The Thirteenth Floor. Though eclipsed by The Matrix at the box office, the movie has built up a cult following in recent years. His latest picture is a remake of Larry Cohen’s 1974 horror It’s Alive, about a killer mutant baby. “What we have nowadays is a Kafkaesque fear of the unknown,” he tells Matt McAllister.

Were you daunted about remaking a horror classic?

No, not all. The screenplay came to me before I’d seen the other It’s Alive movies. But I knew that this was a huge franchise and I had to meet expectations. To be honest with you, when I read the screenplay what touched me most was the very simple fact that it breaks with the taboo of motherly love. It wasn’t just another monster movie. And in my opinion that was the modern aspect of a new version of It’s Alive.

I felt the only way to create a new interest in It’s Alive was to attract a younger audience. You have to draw them into the movie theatres. And what I found in the screenplay was something that touched both my heart and my fears. It taps into fears of becoming pregnant, of giving up your old life, of something that can destroy your life and your relationship with your loved ones. In fact, it’s killing the relationship in a literal way! And that was the controlling idea in my work on this project.

Do you think that the tone is very different in your version?

Absolutely. I think we had to create a change in tone. You can’t just ignore the fact that the franchise is 35 years old! I think the movie needed a new element to it, and at the time when I was doing this movie in the US we had a strong feeling about fear over things that aren’t visible. The idea of the invisibility of a threat was something that excited me much more than having a 3D killer baby roaming around and murdering people in an explicit way.

I went down a different path, with more elements of a psychological thriller, where we leave open the question of whether the baby is really the killer or if there are other elements involved.

It seems to have been a bumper couple of years for killer children movie with Eden Lake, Orphan, The Children…

Yeah, and The Stepfather too! But It’s Alive was actually made around two and a half years ago, and it was one of the first films to tap into this idea where this safe haven is a threat. We were ahead of the others! It’s just a pity we had to wait before the movie hit the marketplace.

Did you ever speak to Larry Cohen?

No. My contact person was Robert Katz – he’s the producer of this movie and a long time contact of Larry Cohen, and he came aboard at an early stage. He briefed me.

But you need to keep in mind that Larry Cohen is an older gentleman and we wanted to make a movie for a younger audience. Who is watching horror movies right now? This isn’t The Sixth Sense, this is a genre movie, and a younger audience is seeing these type of films. This is why we have a college background, with kids in their 20s who are trying to fit into a grown up life. This is where the horror comes – of coming of age and initiation.

When the originals came out in the 1970s it was a different time, the heroes were older and settled; they had a nice house and were living a nice life. It was the time of the nuclear threat and a cold war. But what we have nowadays is a Kafkaesque fear of the unknown – we just don’t know why we have fear. We can close the doors but it happens inside, inside the family.

One of the film’s stars is James Murray, better known in UK for Primeval…

We had an extensive casting session in the UK and US for both. James Murray was one of at least 30 to 40 guys we interviewed in London. He blew us away!

In the pre-production stage a producer can like one guy and you like another. But when James Murray came along he was THE guy! He has this manly quality that’s fitting for a character who tries to make things right. This character isn’t a guy who falls for a woman, he’s a guy who makes a decision for a woman and then sticks to it! And that was the character we saw in him. James Murray is a man’s man and that’s why we liked him.

He’s a great partner to the character Bijou Phillips is playing. She’s lost – she’s 25 years old and doesn’t know if she’s ready to become a mum. And all her fear channels into motherly love in a profound way as it’s the only thing she can hang onto – and she hangs onto it till the end!

Yes, but I think in our movie she’s a true character actor; in Hostel II she was wasted at one point. I actually learned a lot from her.

What are the main difficulties in making a horror movie like this? Presumably there were budgetary limitations…

Well, firstly, yes, we did have huge budget limitations. But that actually frees a lot of creativity. Since you cannot use a lot of CGI animation, you have to make up for it with a different kind of horror. And I was never fighting the budget limitations – or the 27 or 28 shooting days – it’s just what it was when I came on board. We filmed it in Bulgaria, and those guys were great, but after 12 hours that’s it! They want to go home, they don’t get paid for overtime.

If you accept all of that, you have to create a horror that’s affordable. And so I went down the route of movies I like – Polanski’s Rosemary’s Baby for instance or Joseph Losey movies. The horror is a psychological horror rather than the horror you show. Eli Roth bragged about the litres of blood he was using. I’m bragging about how little blood I used!

Do you see this as the start of a new franchise?

I would love this to be a new franchise – that’s what we did have in our minds. But I’m just happy if the hardcore It’s Alive crowd who loved the originals enjoy this one. And maybe after people see the new one they’ll go back to the old ones.

I wanted to briefly ask you about The Thirteenth Floor. It’s been reassessed to some degree in recent years, but it kind of had its thunder stolen by The Matrix at the time…

This is a very sad story. People should listen to the commentary track on the DVD for the full story. But I want to talk about this. We were first. The Thirteenth Floor came out of a concept written in the 1960s – there was a novel in ‘64 by an American writer named Daniel Galouye called Simulacron-3. We secured those rights very early. This guy wrote about this concept of a world with ID units who exist for one purpose – to be guinea pigs for another world that is checking out the effect of commercials on them.

This novel came to the attention of Roland Emmerich and me very early. Rainer Werner Fassbinder made a little TV piece in the early 70s on that premise. But he made a different movie out of it – he criticised German society and it was a political movie, rather than about virtual reality.

Roland had a lot of virtual reality screenplays on the table. And he said to me, “You know what, this is ridiculous! They’re all stopping short of a movie in which someone discovers that the world we’re living in is actually the virtual reality.” That brought us together and then we acquired the original novel, and worked for over two years on the screenplay. I developed 30 treatments! And as we got into production we heard through channels about The Matrix. The Wachowski brothers obviously tried to purchase the rights of the novel, which came to their attention too. But we had the rights. So then what happened was a race against time.

The problem was I had about $16 million – in the beginning it was only $14m – and the Wachowskis had about $90m! You understand? We lost the race, very simple. We were in production before them and finished before them, but the post-production – since we had so little money – dragged on forever, for 10 months. This is when we lost the race. And everyone chimed in saying, “Oh, The Thirteenth Floor is exploiting the idea of The Matrix, blah blah blah…”, which is really ridiculous.

I want to say one thing more. If you follow the path of The Matrix trilogy then you see and you feel how they stopped short of a true experience. I think that The Thirteenth Floor still delivers a much more thorough impact on the sci-fi genre than The Matrix. One day I will publish the first draft we had – there was a showdown, which alone would have cost $35m, in which the world we’re living in starts to fade away. But the studio said “Are you crazy Josef? You’re not getting $50m! You’ll never make this movie, you’re a first timer!” So we had to bring everything down to a drama level.

I’ve been following discussions on the internet and, yes, that seems true. And I have to tell those people that I’m right now working on a sequel, which will literally blow people’s lids off! Because I’m going to go somewhere where people will not think I’d go. It’s a sequel that is not an obvious one, but it will take a little more time!