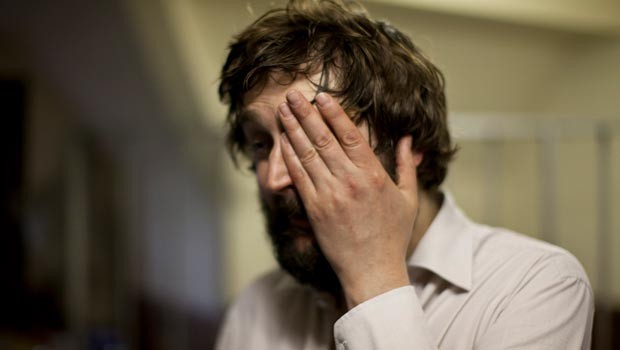 Stand-up Joe Wilkinson has established a cult following on the comedy circuit as one half of sketch duo Two Episodes of Mash with Diane Morgan. He recently made the transition to television, playing Dan, the weird neighbour, in Stefan Golaszewski’s hit comedy Him & Her. Starring Russell Tovey and Sarah Solemani, it was the highest rating sitcom debut on BBC Three and a second series begins filming in 2011.

What do you think Stefan saw in you that made him cast you as a slightly creepy oddball like Dan?
I have no idea to be honest. He later told me that he had written the part with me in mind after seeing my Edinburgh Fringe show. But I didn’t play anyone like Dan in it. So I’m glad I didn’t know that before the audition or I would have been trying to work out which bit of the show he liked.

Did you expect the series to be as successful as it has been? Why has it done so well on BBC Three?
I couldn’t have guessed it would have gone down so well. I knew I loved it when I read the scripts but that doesn’t mean other people will. I think people have got into it because it is very real and it’s funny and beautiful.

Do you keep an immaculate home or do you fester in your own domestic filth too?
My home isn’t immaculate but it’s definitely not filth. In fact, we’ve just done a big clean so the flat looks great.

How do you see Dan’s role developing in the second series?
I have no idea. Stefan is a brilliant writer and impossible to predict. I’m hoping for some nude scenes.

You tend to play slightly shuffly, awkward eccentrics in Two Episodes of Mash. Are those just the roles you’re most comfortable playing?
I guess I am comfortable playing weirdos which is worrying but I love playing all sorts. I don’t think I would get away with a romantic lead.

Which sitcoms do you enjoy and why?
Porridge is my favourite sitcom because the characters are so wonderful and the writing is just so, so funny.

Two Episodes of Mash is really popular with other comedians. Why do you think that is?
I think it’s because it’s a bit weird and comedians see so much comedy that they like to see something a bit odder.

You and Diane have taken your sketches to Radio 2 and online, are you aiming to get them on television? And if so, is there anything in the works?
We are hoping to do more radio stuff because that was so much fun and we are doing some bits on the telly too. It’s great to be able to do both.

Notwithstanding Diane’s disclaimer that you and her aren’t dating at the start of your live shows, in both your sketches and with Steve and Becky in Him & Her, there’s a real gender equality to the comedy in terms of who has the best lines, is acting the fool etc. Why is this so rare?
I don’t know if it is or isn’t rare. I find Diane hilarious and that’s that really. We never worry about who gets the laugh as long as the audience is laughing. It’s a partnership not a competition. A lot of the time we can’t remember who’s got the laugh anyway – we’re just happy we haven’t died.

As a stand-up, sketch performer and now comic actor, which are you pursuing most vigorously and why?
I’m doing all three because I enjoy all of them. But at the moment I’m doing a lot of stand up because I’m doing a new hour in December at the Pleasance in London. Quick plug! It’s called My Mum’s Called Stella and My Dad’s Called Brian (Joe Wilkinson My mum’s called Stella and my dad’s calledBrian]).

Would you be interested in writing your own sitcom?
I would love to but I’m still learning. I’m sure working on Him & Her with brilliant people will help me do that too.

Finally, what are you working on just now?
I’m about to watch Tango & Cash!