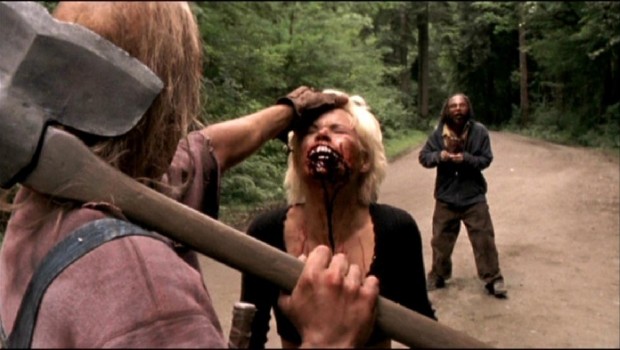 Gloriously gory sequel Wrong Turn 2 is the directorial debut of the horror-obsessed Joe Lynch. The movie sees the cast and crew of a Survivors-style reality show being stalked by the monstrous cannibals of the original. He tells Matt McAllister how he’s always been interested in mutant kids.

How does Wrong Turn 2 differ in its tone and style than the original?

I didn’t just want to remake the original, and thought this was a great chance to do something a bit different. So whereas the original kind of drew from the horror movies of the 1970s like Texas Chain Saw Massacre, I looked more to 1980s splatter movies films like The Evil Dead.

The film pokes fun at reality TV. Did you need to watch much of it to get the Survivors-style just right?

Well, I have a very unhealthy relationship with reality TV shows! I wanted to say something about the reality show and to use that style, but I didn’t want to be too heavy-handed about it or make it a big part of the plot – which is why we don’t film it like that all the way through. But I just thought it was a great way to set up the characters – oh, this one’s the jock, this one’s the goth. But then we could go on and make you care about these characters.

I loved the idea that I could use the medium of video in very unique ways and actually make more effective set pieces and kills using that kind of aesthetic. That’s what appeals to me. I get to put video cameras everywhere and create – I hate to say a ‘homage’ – but something akin to those beheading videos that came out a couple of years ago, and I could really affect an audience in that way. And that’s what appeals to me more, rather than, “I get to comment on the state of reality shows…”

Originally, I was like “Wouldn’t it be crazy if we had Eliza Dushku playing herself?’ So we could have a beginning where she’s talking to her agent and she’s like, “Do you know who I am? I’m Eliza Dushku! I was in that Wrong Turn movie!” You know, just to play with that idea of reality versus fantasy. That’s been the big complaint of the movie – “Where’s Dushku?” Like, I don’t have the money for The Dushku! (Laughs)

So instead I thought it would be great to take an actual reality show contestant and then put them in. Because once you become a reality TV star, you’re usually going to be on four reality TV shows – Celebrity Bowling! Or Celebrity Fit Club! Or Celebrity Drug Rehab! Or some shit like that. And I thought this is the perfect opportunity to blur this line between reality and fantasy where it’s a real life person getting killed – well, so to speak!

A lot of direct-to-DVD sequels have been released in recent years. Do you think that many directors haven’t quite realised the potential to do something interesting with the medium?

Totally. I think people are going to start to notice that the DVD market is just as profitable, if not more profitable, than theatrical. Theatrical has unfortunately, in certain respects, become more of an ego stroke than it a profit market. I was like, “Well look. If they put it out in theatres it would bomb, just like the first film.” The first film came out in theatres in the States and it bombed – but it made all its money back on DVD. And that’s why we’re talking today, because from that success we made Wrong Turn 2.

It’s a great opportunity for directors because it gets your work out there. Sure, there’s probably some directors who feel like they’re too big for that and that it’s a mere foot in the door. But there’s so many resources out there, and you can make great movies with the budget that they’re using for direct-to-video. We only had four million dollars. But budget to me isn’t really as important as getting all the right people together with a passion behind it…I wanted to make the best horror movie I could so people would watch this and say, “Why wasn’t that in cinemas?’ There’s been this stigma for years that if you direct-to-video, that’s a bad thing, that it’s the equivalent of cinematic diarrhoea. And that’s not the case at all.

You spent some time working for Troma, is that right?

Yeah, I played the Clothespin in Boy in Terror Firmer! But after that I was hired as an in-house writer for Troma for about a year and a half.

So did the Troma method of making movies influence you at all?

Totally! It proved to me that you could make a film for 59 cents, a roll of duct tape and a camera! You can literally do whatever you want. Also Troma teaches you to do everything on set, or at least try to be involved in every department as much as possible – because on a Troma movie you literally do have seven jobs.

For me, it reinforced the idea that I can make movies no matter what, even if it’s for no money. It was that kind of bravado attitude that I loved and that’s what influenced me. Sure, some people will go, “Oh, he’s got little mutant babies and kids in his movie, that must have been the influence”. No, believe me – I’ve been interested in that way before Troma!

What’s your view on the state of horror movies in recent years?

It’s a scary situation, because in the horror world you don’t want to hurt anyone’s feelings! I loved Hostel – I thought Hostel was a really well crafted movie that tapped into our cultural fears of the time, I loved how it flipped the switch on us, and went from an 80s sex comedy to a full blown giallo movie. I didn’t like the first Saw – I liked the concept, but I didn’t like the execution. But I loved Saw II, I thought it was a really well-embodied idea.

I loved Hatchet. I mean Adam [Green] is my friend, but even if he wasn’t I’d be the first person to say that I loved that movie. It tapped into those 80s horror splatter movies. And The Mist – for me that’s the best horror movie of the last couple of years. But, like the movie that it kind of emulates, The Thing, I don’t think it will be truly appreciated for another couple of years. You don’t put a horror movie out during Thanksgiving! It was like putting Grindhouse out during Easter. I mean, I loved the Grindhouse experience, seeing the two movies together – it sucks that you guys didn’t get that in the UK. It was one of the greatest movie experiences of my life!

What’s next? Are you going to make Wrong Turn 3?

They’re talking about Wrong Turn 3. There’s one particular idea that’s knocking around at Fox – if they do that, then I’d like to do it. Otherwise, maybe I’ll let someone else. I’ve also got an idea for a film called The Ozoners – a monster movie set in Long Island, New York in 1984, if you can be any more specific than that! It’s kind of American Graffiti meets The Thing. Maybe I’ll get to do it by the time I’m 60! It’s a small town, Stephen King’s Castle Rock type of movie.

Otherwise, I’ll be writing of course. Though unfortunately the writers’ strike is holding us back. But horror is my default genre – to make as well as watch. Write what you know – and I know horror movies more than anyone could. I want to make films in other genres – I’d love to do a comedy or an action film or a western, but it’s all about the script really.

Wrong Turn 2: Dead End (The Extreme Edition) is out to buy and rent on DVD on 7 January from Twentieth Century Fox Home Entertainment.