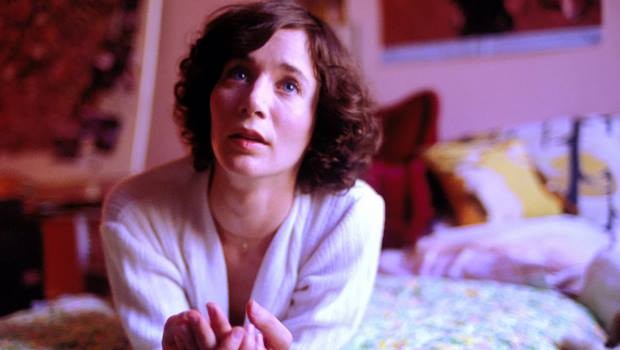 The first thing I notice about Miranda July is that she’s tiny, much younger looking than she appears on celluloid, and curiously old-fashioned, with enormous, Frodo-like blue eyes and thick, bobbed hair. July is in London to promote her debut feature, Me and You and Everyone We Know, which arrived in cinemas on August 19th trailing clouds of glory, critical acclaim and Cannes, Independent Spirit, and Sundance awards and prizes. She pretzels her denim-clad legs and talks about performance art and conventional film-making.

‘The first thing to say is that I am still a performance artist – I’m more of a writer, really. I’d made many short movies and all my work is narrative and dialogue driven. So the transition, seems so huge to other people, but it was really the best education possible. My short movies had gotten longer and longer and they had kids in them and they weren’t that different thematically. So for me the big leap was more into the ‘industry’, you know, and all the conventions of it.’

Writer-director-artist-actress July clearly likes to keep her fingers in lots of pies. The appeal of feature films almost seems to be that they can’t be too experimental – that, and reaching a larger audience.

‘Its great to make a feature film and find ways to kind of ground all the magical and experimental stuff in reality and have the discipline, finding ways to show that and communicate the same feeling. But there’s nothing like having it be that acceptable; people just don’t feel as invited into an art gallery as they do into a movie theatre, and I’m not going to reach as many different types of people.’

July’s short films, Haysha Royko, The Amateurist, Nest of Tens, Getting Stronger Every Day, have have been screened internationally at sites such as the Museum of Modern Art and the Guggenheim Museum; her multi-media performances have been presented at The ICA in London and her short stories published in The Paris and Harvard Reviews. (Funnily, for a writer, she peppers conversation with ‘you knows’ and ‘whatevers’ and frequently lets sentences just peter out – her thoughts seem to dart all over the place, scattergun.)

She has already achieved so much as an artist but the challenges of making a feature film were still daunting.

‘The good thing about working with a crew is that its all support for you, so in some ways there’s less to worry about, but its also constant engagement and sort of mothering, running this ship. It is exhausting. I would say the hardest part of production for me was physically getting enough sleep and food and not getting totally worn out.’

Interestingly, she didn’t seem too bothered by the challenges of getting financing, usually the bane of an independent filmmaker’s existence.

‘Writing the script was a real joy, I loved learning that craft. And then I have a really great producer, another young woman, so we kind of went out together, looking for money – it wasn’t like some totally foreign thing. The process of sending things out and making these calls and being rejected is like being rejected for anything, like a date or something – its like should I call back, should I wait, should I move on – its sort of mundanely painful, its not that interesting. And then once you get financing, its such a mad flurry, you don’t have time to think anymore or worry, you’re just going.’

In Me and You and Everyone We Know, July plays Christine, an affable but whimsical performance artist who is struggling to reach the curator of the local museum of contemporary art. Tired of rejection, Christine sends in a tape with a recorded message that cuts through all the red-tape and addresses the woman directly. Does this reflect July’s own experience as a struggling artist?

‘Nothing in the movie is literal in that way. But I suppose I had that kind of fantasy, what if I said this to my boss. I don’t have a boss per se, the nearest thing I have is people like that. But I was more interested – we’re stuck in this kind of bureaucratic relationship, what if that was sort of turned just slightly, what would that feel like. And I thought if I was going to show an artist, I didn’t just want to show her being brilliant all the time. She’s just as struggling as anyone else in the movie.’

The film seems to reflect the ongoing struggle of lonely, inarticulate individuals to make connections. Perhaps the most controversial strand of the story is that of six-year-old Robby, who shares fantasies of ‘pooping back and forth forever’ with a stranger in an internet chatroom.

‘So many movies are made about coming of age sexuality but little kids too have sexuality, a different sexuality but they have their hands in their pants all the time and have to be taught not to do that.’

In a world where parents won’t let their kids walk to school in case they are abducted, this is a difficult topic to talk about. There’s that risk that allowing that children are sexual beings feeds into the paedophile fantasy that children want to sleep with adults.

‘Mothers see the movie and really relate to it. If there’s only shame about that, if its only discussed in terms of paedophilia, or something going terribly wrong, you end up with teenagers coming of age already feeling awkward about themselves… I don’t think there are many of us who are perfectly equipped to related to other people and their bodies. It’s quite important to acknowledge that its healthy and normal for kids to have those feelings; as a young woman I am probably the safest person to advance this topic, and maybe it is somehow a woman’s topic.’

The performances of the children in the film are uniformly fabulous. Brandon Ratcliff as Robby has some of the funniest lines, and he’s only six.

‘I never talked with him about it because I wanted to keep it all in his realm, so for him it was just ‘that’s the day I get to say the silly word’ – it was fun for him, it was fine. I didn’t want to be ‘are you comfortable’, bringing all my anxieties… I asked his mum and she said he was fine, not concerned at all – it was funny to him.’

Robby’s older brother, Peter, played by Miles Thompson, is undergoing an initiation of his own, at the hands of two neighbourhood girls, Heather and Rebecca (Natasha Slayton and Najarra Townsend), who are trying out their oral sex techniques; how did they cope with filming those scenes?

‘They were hyper-aware of their as teenagers are, and had a sort of awkwardness which I thought was good. I wasn’t like ‘let’s loosen up here’ because I thought you should be awkward, that’s totally appropriate, and let’s just go with it and start shooting. And the language is pretty formal. It helped them to know that it was ok to not be comfortable that day. I think the hardest thing is when you have to feel something that you have no experience of feeling but I wasn’t asking them to do that. They are real teenagers, one fourteen and the other was fifteen – I don’t even know exactly where they’re at…’

But it would still be awkward even if you were experienced – it’s a totally different scenario on set with people watching you, filming you!

‘I know, my God! You’ll notice that my character doesn’t do anything sexual. Only in retrospect I realised she’s very flirtatious and romantic, but not at all sexual.’

Christine is flirtatious but romantically inept; when she meets shoe salesman Richard (John Hawkes) she is drawn to him immediately, but fails to act. Her dithering may exasperate audiences – why doesn’t she just ask Richard if he wants to go for a cup of coffee!

July laughs ‘She’s sort of hung up, creating dramas that don’t need to be there.’

The kids in the movie seems much more grownup than the adults; they are completely direct and not afraid to say what they want.

‘Years of psyching yourself out will do that. I have a very direct side, which I expressed through them and another side too.’

July has now moved from Portland, Oregon to Los Angeles, and is working on her next script, as well as a book of short stories and a new performance. One can only hope that her idiosyncratic view of the world will not be sanitised by this proximity to Hollywood.

Related:
Me and You and Everyone We Know review