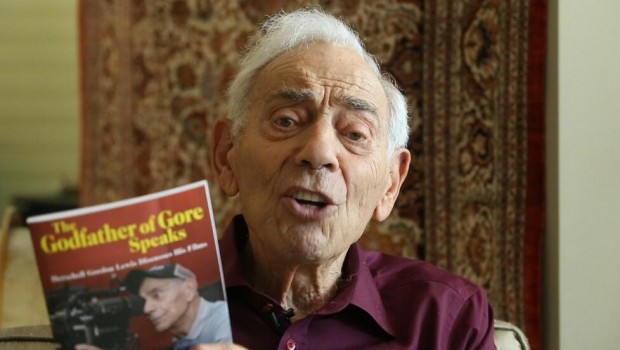 Exploitation cinema legend Herschell Gordon Lewis has been dubbed ‘The Godfather of Gore’ by his fans – and with good reason. The filmmaker invented the ‘gore movie’ with 1963’s Blood Feast, and went on to give gorehounds other such blood-soaked classics as Two Thousand Maniacs!, Color Me Blood Red, The Gruesome Twosome and The Wizard of Gore. Lewis quit directing after 1972’s The Gore Gore Girls, but returned in 2002 with Blood Feast 2: All U Can Eat, which gets the Special Edition DVD treatment this month. “You’re disgusted one moment and laughing the next,” he tells Matt McAllister.

Why was there a 30-year gap between The Gore Gore Girls and Blood Feast 2? Did you become disillusioned with the industry?

I sometimes wonder if the industry didn’t become disillusioned with me. In fact, I think I read something in your former publication [Dreamwatch] that seemed most annoyed I made movies at all!

But the answer is very simple: there was simply no deal left. What happened, as you are aware, is that I am regarded as the originator of this kind of movie. And for quite a while I had the entire industry to myself. But then the major film companies said, “Hey wait a minute, how long has this been going on?” And they began making this kind of movie with things I didn’t have – budgets, for instance. They had effects that I could never dream of matching.

So I thought it was time to leave. After The Gore Gore Girls, which I thought was my goodbye to that business, I moved into other areas in which I was already established [Lewis has forged a successful second career in direct marketing.]

What tempted you back to make Blood Feast 2?

How did you find the shoot?

The problem I had with Blood Feast 2 – and you may be aware of this – is that it wasn’t really my movie. I was just a hired Herschell who showed up to kill because they wanted my name on it. So I had very little to do with the movie aside from sitting in the director’s chair. Which is delightful by the way – I’ve never had such a good time, or so little to do, on a movie!

Blood Feast 2 broke the drought. After digesting that, it got the juices flowing again, so I said it’s time to make a movie I wanted to make. That was the genesis of what was previously called ‘Grim Fairy Tales’ but is now called ‘The Uh-Oh Show’. The reason for the title change is that every distributor has expressed a preference for ‘The Uh-Oh Show’. And the distributors, as you are aware my friend, make the ultimate decision whether a film’s going to make money or not!

I’m also in the pre-production stage of a film called Mr Bruce… It feels great to be making movies again, and makes me wish I hadn’t spent so long away [laughs]. I’ve said before that making movies is like having malaria – it lurks in your bloodstream and can flare up when you least expect it!

What’s The Uh-Oh Show about?

There’s a television programme called ‘Uh-Oh!’ If you get the answers right you get a Mercedes Benz, cash, or a trip around the world. But if you get it wrong… The whole audience goes “Uh-oh!” And there’s this big spinning wheel, which is segmented off into various body parts that the contestant will lose.

It quickly becomes the most popular show on the air. The people on the networks say we have to have a second show to go with this. So they come up with a show called ‘Grim Fairy Tales’. It’s the way the Brothers Grimm would have written their fairy tales had they had the courage to do them properly! Then a reporter becomes worried that these aren’t fake effects but real, and she goes off to expose it.

Yeah. There’s a great similarity because the audience won’t just titillated but also entertained. With this I’m counting on audiences being horrified but within 10 seconds laughing hard. They will know that we had a good time making it, and they will have a good time watching it!

There’s often a lot of comedy in your movies. But Blood Feast 2 is definitely more comic than the original…

Oh yeah, that’s the intention. Once I was past Blood Feast and Two Thousand Maniacs! – which is still my personal favourite of my movies – I wanted to have the gore combined with laughter, so you’re disgusted one moment and laughing the next, so Blood Feast 2 is a lot more comic than the original.

One of the highlights of the film is the cameo by John Waters.

Oh, I’ve known John for years. The producer said he could get John Waters to appear in the movie. I wasn’t sure if he’d want to as he’s not really an actor, plus he lives in Baltimore and I live in Fort Lauderdale. But John very kindly agreed to play the role of the paedophile priest. In fact, I wanted him to appear in my new movie too, but he’s since joined the Screen Actors Guild who have all these extras rules and regulations, so that made things tricky.

Do you enjoy grossing people out?

Yes! And the good thing is that because people don’t really know my face, I can sneak into theatres where they’re showing these films and I can watch people’s faces – faces of disgust or laughter. It’s great fun!

It must be harder to shock people these days.

Oh yeah, definitely. A lot of horror movies just try to be more extreme than the last, but I’ve kind of stepped away from that. I try to do something different. Which is why we focus on what I call ‘intensive gore’ instead of ‘extensive gore’, with close-ups of wounds and limbs being hacked off. But, as I said, I try to make sure that the audience leave with smiles on their faces.

Did you know you were onto a winning formula with the original Blood Feast?

Not at all. We were experimenting, making it up. We just thought, ‘what would happen if we made a really extreme, gory movie?’ We had no idea how it would do. We didn’t even know if we’d be able to show it – the film could have just sat in a vault somewhere! We just realised that no one had really produced a picture focusing on the blood and guts before.

Blood Feast was quite basic in terms of the effects, the script and so forth. But audiences loved it and we knew we were onto something, though of course many people were outraged.

Two Thousand Maniacs! is, by your own admission, a better movie…

After the experiment with Blood Feast, [producing partner] David Friedman and I sat down and said, “Well what if we made a good one?” [laughs] So we took much more care making Two Thousand Maniacs!, and it was properly scripted and the effects and acting were superior to Blood Feast.

Critics have sometimes been tough on films like these. One of the charges often levelled at them is that they’re misogynistic, that it’s always women who are being hacked up…

Well, it’s not always women – in Two Thousand Maniacs! it’s men and women being killed. But also you have to remember that at the time – and we did the research – 85% of the audience watching these films were men, so that’s the audience we were catering for. That’s not the case today, by the way. But I guess I made She Devils on Wheels as a kind of reaction to that – to put women in the lead roles as the tough gang fighting men.

But, you know, controversy has always followed a lot of my films. I know that it was very difficult to see many of my films in England for years. You could get permission to show them at special film clubs but that was about it. It was crazy really, like most censorship. And that was when these films were over 20-years old! In Australia Blood Feast was suddenly banned after being available for 30 years! How can it suddenly be offensive? You can’t really take these movies seriously!

You’re known as ‘The Godfather of Gore’ but you’ve also worked in many other genres – comedies, kids films, nudie cuties. Does it bother you that only your gore movies are usually recognised?

I actually like being known as The Godfather of Gore, as the person who started doing this kind of movie, though I’m not sure if I’d want that on my tombstone! Because I get to go to all these horror conventions and meet or talk to all these people who really enjoy these movies and know my films better than I do! I mean, critics have always kind of dismissed these type of films, but audiences – or a certain audience – love them. Many of them had sort of been forgotten, but with video and then DVD they’ve become kind of popular again.

These movies have had a certain degree of critical reassessment in recent years.

That’s a very astute observation. And it’s probably down to just how long I’ve been around. If you’re around long enough, anything can be reassessed! But I think certain magazines and websites and film historians have started to look at these films as historical artefacts and examined the influence they had on low-budget film production.

Were you ever tempted to make movies for a major Hollywood studio?

I was – but no one really ever asked me! I mean only one studio semi-approached me, and they just wanted to have my name on a film as a producing partner, and it didn’t seem right. I’d have lost control, and I realised that I was happy just doing what I was doing.

We’ve seen remakes of Two Thousand Maniacs! and The Wizard of Gore in recent years. Would you like to see any of your other films remade? Or would you be interested in remaking any of them yourself?

I didn’t have anything to do with those two remakes, of course. But, yes, I’m happy to hear about any interest in remaking my films. The one that there is some interest in at the moment, actually, is She Devils on Wheels. If that comes off and if they want to hire an old director to remake it, I’d be interested in talking about it…

Blood Feast 2: All U Can Eat is released on DVD (region 2) by Arrow Video on 11 January 2010. This interview was originally published on Total Sci-Fi.