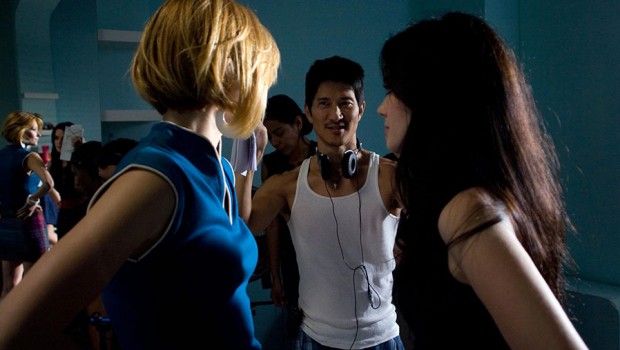 With his cult hits The Living End and the ‘Teen Apocalypse Trilogy’ (Totally F***ed Up, The Doom Generation and Nowhere), Gregg Araki became a key part of the ‘New Queer Cinema’ movement of the early 90s. Since then he’s wowed critics with the darker drama Mysterious Skin and directed the cannabis cupcake comedy Smiley Face. His latest movie is the hugely enjoyable Kaboom, a truly bonkers mix of teen sex comedy and end-of-the-world sci-fi thriller. Oh, and there’s also an angry lesbian witch. Araki tells us why we won’t be seeing him directing the next Big Momma’s House anytime soon…

First you had your Teen Apocalypse Trilogy, then you produced a TV pilot entitled This is How the World Ends, and now you’ve made a bona fide apocalypse movie. Why are you so drawn to this subject?

I feel that the apocalypse theme goes in cycles, and with the impending arrival of 2012, it’s now in the cultural zeitgeist. I mean, this year all the birds fell out of the sky! All this weird stuff makes you think, “How long’s the world going to be around?”

It’s fun for me as a filmmaker to take those ordinary feelings you have when you’re 18 or 19 years old – when you frequently have feelings of doom – and then make them extraordinary. I love the scene in Kaboom where someone says, “What if this really is the end?” So I like to play with that end of the world metaphor.

Kaboom was originally conceived as a TV show, wasn’t it? It’s easy to imagine following these characters over the course of an entire series…

Kaboom is something I’ve been working on for years and years. And, yeah, there was a point at which it was a TV pilot for a series. People have said it’s like a whole season of a TV show condensed into a film, and there are aspects of that – all of these subplots and different characters, along with the soap opera machinations of wondering what’s going to happen next. But at a certain point it made sense for me to make it into a three-act movie.

Where did the idea come from? Was it inspired by genuine conspiracies?

One of the main inspirations for Kaboom was really just wanting to make something outside the box and different from every other movie out there. Films like this don’t get made any more because it’s so difficult in the current market place. There’s a tendency today for films, particularly indie films, to follow certain rules and formulas, you know? Like, “Oh, this is a thriller, this is a teen sex comedy”, and so on.

Kaboom is totally outside the box, a mash-up of so many different genres and so many different tones – this crazy sexuality, these conspiracy theories, a supernatural element… You know, so many things are going on that it’s really not something that’s even been attempted. So I wanted to make a movie like that for an audience who feels they’re not represented. I wanted it to be a movie that they could really get and claim as their own.

Was it always intended to be made on a fairly low budget?

Kaboom was always conceived as a smaller movie so I could take chances. I could just go out there and have all this crazy stuff happen. I think it can be difficult making a film like this as a bigger movie, because it has to function in a mainstream way to make its money back. It has to appeal to the same audience who might go and see a Jennifer Aniston movie because so much money is at stake.

Saying that, you must have been offered some studio projects during your career. Would you like to make a big studio movie at any point or would that require you to forfeit too much control of your vision?

I’ve always said that I’d have no problem doing a studio movie, and I have been attached to do studio movies in the past. But I’m only going to do something that I love – it has to be the right project at the right time. I’m not going to do any old studio movie and make some piece of shit.

It’s harder in the sense that there’s not many studio movies released each year where I think, “Oh I would have liked to have directed that!” I remember once, years ago, I really wanted to do American Beauty – if it was like that then, you know, I would do it. But I’m not going to direct, like, the next Big Momma’s House. It’s really a question of it being the right movie.

So you wouldn’t be tempted to continue your apocalypse theme with Armageddon 2?

Kaboom isn’t an easy movie to classify, but it is at least in part a science fiction movie. Are you a big fan of the genre?

I’m not like a huge sci-fi head, though I’ve certainly seen my share of science fiction. But I wanted Kaboom to operate in a world where anything can happen, and that’s sort of similar to the way science fiction takes something real, like a scientific experiment or innovation, and then takes it to this other place. To me Kaboom does that – it starts in this level of reality, which is this cult dorm world, and then goes to a more stylised, fantastical place.

Was the film a deliberate attempt to return to your earlier, lighter work?

There’s definitely a level of playfulness and joy in Kaboom that’s very different from Mysterious Skin and even from Doom Generation and Nowhere. It’s perhaps closer in tone to the last film I did, Smiley Face – both have an optimistic playfulness about them. Kaboom is an interesting contradiction in that it’s a dark apocalyptic epic but with a lightness to it – it won’t bring you down. People watch it and want to go and party!

The protagonists in your films tend to be teens or adults. Is that because that’s the age when a lot of people are defining their identity and sexuality?

That is true, there is a rich purity in characters that are growing and changing. The older you get the more set you are in your life. But after making the Teen Apocalypse Trilogy, I went through this period where I didn’t want to make movies about 18-year-olds. I purposely wanted to avoid that because I didn’t want to be pigeonholed, so I went off and made Splendour, which is more of a romantic comedy.

After that I was sent Mysterious Skin. I loved Mysterious Skin so much as a book and really wanted to do it, despite the fact it was about 18-year-old kids again. After that it was important to me to do something completely different – that’s why I did Smiley Face, which was about a stoner chick’s misadventures. So for me as a filmmaker it is important to keep growing and keep doing different films.

When you started out you were tagged as part of the New Queer Cinema alongside Tom Haynes and Tom Kalin. Did you ever consider yourself as part of a movement, and do you think it’s helpful that academics and critics often put these labels on filmmakers?

I don’t know if the labels are helpful, but certainly when we made The Living End, which was a very small art project that me and my friends worked on, we never anticipated that it would get the sort of worldwide attention that it did. And to a large extent it was because of the Queer New Wave. It was seen as part of this movement. I think that if The Living End had just been released on its own, and there was no Swoon and no Poison and none of those other films, it wouldn’t have had nearly the same impact that it did. They all sort of attracted attention to each other as it was seen as this phenomenon.

From that time, the early 90s and the days of the Queer New Wave, all of us have gone on to make films with different themes. So it was never truly a “movement” in that sense – we never had any kind of agenda or dogma. All of us were just filmmakers making movies that happened to have a synchronicity, and it was very much in the culture of that moment – the AIDS crisis, Queer rights and the New Queer Movement all sort of happened together.

You’ve worked with a lot of famous faces over the years – Perry Farrell, Heidi Fleiss, Traci Lords and many others. But your later films don’t seem to feature so many cult faces.

Well, that was really part of the pop culture aesthetic of movies like Doom and Nowhere. Also, when I used to talk to the casting director about those movies, I said I wanted them to feel surreal and part of a weird dream you were having. So that’s why all the characters in those movies were weird, out of context celebrity people – the sort of people who might suddenly turn up in your dream, you know what I mean? I wanted those movies to feel hallucinogenic in that way.

Will we ever see This is How the World Ends on DVD?

The only way they can be released is secretly – as an Easter Egg or something. So maybe we’ll put it as a hard-to-find Easter Egg for the hardcore fans!

Finally, what’s next for you?

I have three or four things I’m working on now; I don’t know which one is going to be next. I’m percolating – they’re all really different from each other but I can tell you it’ll be something new and exciting!