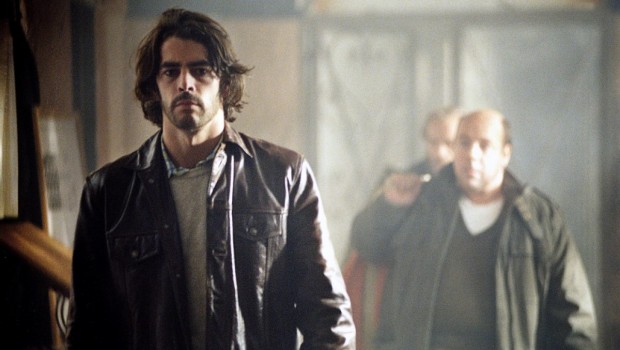 Eduardo Noriega Interview: In the Shadow of the Wolf

“Of course it’s controversial,” Eduardo Noriega shrugs. “It’s really difficult. And I don’t think the film wanted to give solutions. But it wanted to at least propose questions – just invite people to think.”

The movie under discussion is Lobo and the controversial subject matter is that of Basque terrorist group ETA. Or more precisely the individual who infiltrated the organisation back in the 1970s and became perilously close to those at the very top.

Dubbed ‘Lobo’ (or ‘Wolf’) by the media, this was a man who lived in permanent danger of being uncovered by those who considered him a trusted comrade, and who was simultaneously exploited and then abandoned by Franco’s secret police.

For Noriega this is the latest high-profile role that has seen the 32-year-old steadily march onwards to the cusp of international stardom. Born in Cantabria, Spain, Noriega looked dead-set on following a path in music before moving to study drama in Madrid and securing a role in Alejandro Amenábar’s short film Luna and subsequent feature Thesis. Acclaimed performances in the mind-bending psychological thriller Open Your Eyes and Guillermo Del Toro’s excellent The Devil’s Backbone followed, and the actor’s latest sees him embroiled in the potentially sensitive subject matter of homegrown terrorism.

Lobo, while perhaps a little simplistic at times, is a thrilling and emotive movie, with a dashing Noriega firmly asserting his leading man status. Not that Noriega would describe his role in those terms. “I didn’t want to play the hero,” he insists. “I wanted to play a simple guy who is manipulated, who didn’t know how far he was going to go…A guy who is trapped as an animal between two dangerous worlds much bigger than him. His story’s really tragic. He spent two years inside ETA feeling fear. He had to act all the time, control his behaviour the whole time. And it’s based on a subject really important to us in Spain.”

It’s an experience from which the real-life Lobo has never recovered – to this day members of ETA are said to carry a bullet with his name on it. Although it has to be said that the former undercover agent doesn’t sound that hard to track down. “I was really lucky because I met this guy, the real one after shooting the film,” Noriega says freely. “And he was really happy and really proud because of the film. After 30 years hidden for him it was like ‘this is my story. Finally everybody is going to recognise what I did’. So for him it was a really important film.”

Noriega has recently come away from appearing in another biopic – this time as Che Guevera no less in the upcoming movie of the same name. He is under no illusion as to the pressure of taking on such an iconic role. “If I felt responsibility with Lobo then imagine how it was with Che Guevara!” he smiles. “But if you think too much about a role like Che Guevara you don’t do it. When they offer you this it’s like ‘oh my god, this will happen once in my life’. A guy that became a myth, a symbol, a poster…But it’s really difficult to investigate the real guy behind that poster. Most people think they know Che Guevara, but there are not so many people who really know his story.”

It wasn’t so long ago that another Che Guevara movie was attracting acclaim from just about every corner of the planet, that of The Motorcycle Diaries with Gael Garcia Bernal. And – if we’re to believe his publicity – in Noriega we’ve found ourselves ‘the next Gael Garcia Bernal’. I wonder how he feels about this accolade. “Well, I am older than him so I don’t think I am ‘the next’! But I have no problem with that. I really admire him… Fortunately the film he did about Che Guevara was the first period, the first trip Che Guevara took around South America when he was, like, 20 years old. I did just the guerrilla struggle in Cuba when he was almost 30 years old. And then Benicio Del Toro is shooting with Soderbergh and I think they are dealing with the last period of Che Guevara. So there are three Che Guevara movies in a row, but at least they are different periods.”

During the course of our interview Noriega makes for sincere if serious-minded company (somewhat understandable bearing in mind that the topics of conversation are terrorism and celebrated revolutionaries). But it’s when we turn to the subject of the figures he admires that he really lights up. “Mike Leigh…one of my best directors in the world!” he gushes, before reeling of those actors who have had a marked impact on his life – the likes of Robert De Niro, Javier Badem and Tom Cruise. Ah yes, Tom Cruise. I wonder how Noriega felt about watching his hero at work in Cameron Crowe’s faithful but rather messy remake Vanilla Sky – a role Noriega originally made his own in Open Your Eyes. “I felt really proud,” Noriega laughs. “If Tom Cruise thinks about a film I did it is a compliment. It’s weird but it’s okay. I have no problem if Tom Cruise wants to remake every movie I do…”