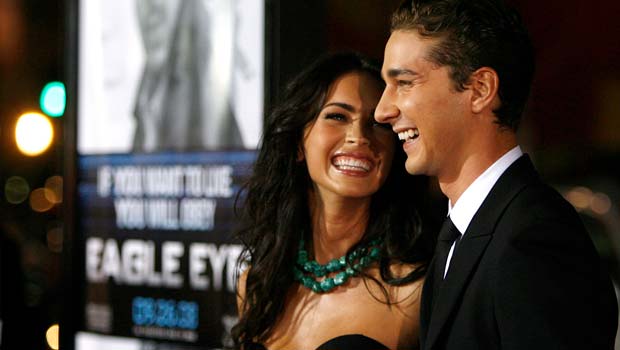 “I don’t mind sitting in trash,” admits Michelle Monaghan as she greets us on the set of DJ Caruso’s new action thriller, Eagle Eye. Monaghan looks uncomfortable and cramped as she sits next to Shia LaBeouf on a refuse barge covered in lumpy bin liners and assorted debris – but it’s all in a day’s work for the rising starlet. “It’s prop garbage, so it’s not really dirty,” she laughs. “I just put my behind on a tyre and get on with it.”

It’s currently day 52 of a 72-day shoot and the action we’re watching takes place in the bustling port of San Pedro, an hour’s drive from the heart of Los Angeles. Between takes, Hollywood golden boy Shia LaBeouf reveals his excitement at being part of yet another Steven Spielberg movie.

“Spielberg came up with the idea for Eagle Eye 10 years ago,” LaBeouf explains. “This movie is his brainchild. He fell in love with the idea and he really wanted to direct it, but when he couldn’t do it, he passed it on to his good friend DJ Caruso. And then Michelle and I both got involved.”

So what’s the film about? “A mysterious woman calls Shia’s character out of the blue,” reveals Eagle Eye producer Pete Chiarelli. “At first, she tells him to start running, but he doesn’t listen and he ends up arrested. He does what any of us would do by saying to the stranger, ‘The hell I’m running.’ But then the police bust down his door and arrest him for something he didn’t do. When the police have hold of him and are telling him he’s a criminal, he listens when the mysterious voice calls again. She explains that she can get him out of trouble and prove his innocence, so he’s going to take note. She eventually leads him to a car, which Michelle’s character is driving, and they head off together.”

“The two characters are then able to keep one step ahead of the law because the mysterious voice uses technology to get them away,” reveals LaBeouf. “She knows how everything works. She’s plugged into all the cameras that watch us every day, as well as all the radios and cell phones – and she’s able to help in their escape from an impossible situation.”

Director DJ Caruso has pulled together an impressive team for the thriller, including producers from the Bourne movies and the stunt team from the Die Hard films. “The crew worked on the Pirates Of The Caribbean movies so they’re schooled in big effects,” he explains, which is lucky considering there are some striking action sequences planned.

“We’re trying to bring the same level of action from the Bourne movies to Eagle Eye,” explains producer Patrick Crowley, who also worked on the Matt Damon spy films. “The director’s got his own vision, but there’s something about the way we smash cars and do our action, which has a very tough, gritty, visceral quality to it. I think that’s one of the things the audience will really enjoy when they watch Eagle Eye.”

“Technology is such an interesting theme, which is what attracted me to Eagle Eye,” Caruso continues. “It has become such a big part of our lives that we’re not aware how much we’re being tracked. We spoke to some FBI guys when we were researching and they explained how they can listen to the cell phones of the mob even when the phones are switched off. They can activate the microphone inside the phone, so there are a lot of scary privacy issues going on in the world today. Everything that happens to Shia and Michelle in the movie could happen to any of us, which makes it all the more chilling.”

LaBeouf and Caruso first worked together on last year’s teen thriller, Disturbia. “I knew I would work with DJ again,” explains LaBeouf. “He was looking for projects that would stretch him as a director, but he had never done this kind of gargantuan movie with a budget and set pieces of this size. I think part of him wanted to feel comfortable with the actors he was working with, hence the people he hired.”

“Shia has grown up a lot since Disturbia,” the director adds. “He’s no longer a teenager; he’s a man. I don’t know how he’s going to go back and play a youngster in Transformers 2, but that’s not my problem. He’s an impressive actor and he is great alongside Michelle, so when you add in Billy Bob Thornton and Rosario Dawson, you’ve got a cast to be reckoned with.”

“Steven Spielberg was very busy finishing Indiana Jones at the beginning of our shoot, but he has been to the set a number of times and he was very involved with the script,” Caruso continues. “The story is an original idea from his head, which makes it exciting but it also puts a lot of pressure on you. We really wanted to make the movie gritty and grainy, and we watched a lot of movies like French Connection and The Parallax View for inspiration. However, when I first heard the idea, it reminded me of North By Northwest. I’d never done anything like this before and yet I knew I had to be involved.”

The cast and crew are keeping tight-lipped on many aspects of the plot past the first 20 minutes of action, although producer Chiarelli reveals that Billy Bob Thornton and Rosario Dawson play the police pursuers chasing LaBeouf and Monaghan. “Thornton is an FBI agent and Rosario Dawson is a special investigator for the Air Force – and they both believe that Michelle and Shia’s characters are high-profile criminal suspects,” he explains. “But that’s about all we can say. You’re just going to have to watch the movie and see what happens for yourself…”