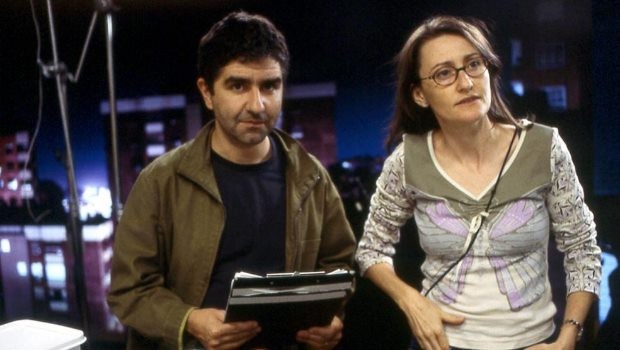 The Hospital is a new members club in London’s Covent Garden. It is very calm and spacious and slightly bizarre, as if the interior designer read Wallpaper and said ‘I want that one’ about everything in it. Still it’s very pleasant and they make tea in a proper pot. I’m here to meet the husband-and-wife writer-directors Teresa de Pelegri and Dominic Harari who are in Britain to promote their new film, Only Human, a screwball comedy about families, religion and the Middle East – a sort of political Spanish Meet The Fockers. As I walk into the room, Teresa warns me not to bump my head on the lampshade, and I notice that the shades are made of some sort of fireproof cloth! We agree that this is interesting…

Dominic and Teresa are that rarest of beasts, a married couple who work well together. They are obviously close, the kind of couple who finish each other’s sentences and complete each other’s stories. They are also very funny, with lots of great anecdotes. Teresa was born in Barcelona, and met Londoner Dominic when they were both in New York studying film. I ask whether their experiences are mirrored in the film.

“We met in New York,” Teresa comments, ‘and the moment I went to New York my mum knew that I wasn’t going to end up with a Spaniard. My father has become a lot less rigid but when we first met he was quite strict…’

‘Oh yes, about us sleeping together!’ Dominic interjects, laughing.

‘We were in Washington in a motel and my father wanted to share a room with Dominic and me to share with my mother,’ she continues.

‘But it came to the point when we had to go into the motel room and he looked at me and said ‘you know what – go sleep with my daughter!’ I think he thought ‘I don’t want to share a bed with this guy!’ Dominic concludes.

And that was the point when you knew you were accepted?

Dominic nods: ‘Exactly! But our families, in terms of religion, some members are more religious than others, and those issues do exist.’

In Only Human. Leni Dalinsky is coming home to Madrid to introduce her Palestinian fiancé, Rafi, to her Jewish family. Unbeknownst to Rafi, the Dalinskys believe that he is a Jew. The Dalinskys are not a particularly religious family – a bone of contention is the new found Orthodoxy of young David, who to the confusion of his older sister Tanya has started wearing a yarmulke, reading Hebrew, and taping down the light switches on the Sabbath – but mother Gloria is horrified. Her instant reaction is simple: Palestinians and Jews kill each other. As soon as a stranger enters, the family falls back onto cliché and cultural references, like their religion.

“This was one of the things we wanted to portray. We have friends, of Jewish origin – the mother has never been religious, the kids haven’t been brought up in the Jewish faith. And then suddenly her son brings home a German girl, and out of the blue his mum says ‘What are you, a self-hater?!’ Dominic recalls.

Teresa takes up the story: “She said to him “You know what you are – a self-hating Jew!’ He was amazed – he only found out he was Jewish when he was 14 or something, but suddenly it was the biggest thing in his mother’s life! It does happen – your identity is reinforced when faced by the other.’

It’s also interesting that Rafi and Leni think that they’re above such behaviour, until they’re stressed, and then all this bile comes out.

Dominic agrees: ‘I think they surprise themselves – they don’t realise that they have all this history inside that comes spewing out. It almost has to come out.’

Theresa explains: “They’re put in conflict by the labelling put on them by their parents.”

“Like when the mother tells Tanya that if she’d carried on with her piano lessons, she might have done better in life.” Dominic chimes in.

Theresa agrees: “And they feed off each other – Leni feels more successful because she is contrasted with Tanya.”

I compare this to the way that at Christmas, you revert to a sulky teenager, however sensible organised and well-balanced you are in your ordinary life, and wonder if the pair feel that families are in some way bad for you. They agree and disagree:

“Families are pain and pleasure. I wouldn’t call it bad, its more catastrophe! But there’s love too.” Dominic says.

Theresa is slightly more positive. “They also give you some of the best moments of your life, you know.”

Which brings me to the obvious question – how do they cope with working together? Never having that space away from a partner, seeing them in every mood, and not being able to get away from work. The duo clearly thrive on their working practices. Theresa explains: “We never have that sensation, but then we never have that abyss, when you’re too tired to tell your partner how your day went. Now we have a little boy, he’s three and a half, and most of the time over breakfast or lunch, we’ll be brainstorming, and he’s there and he’s becoming part of the whole thing. He’s started to make up his own stories too.”

Most of the pair’s work has been in Spain. Their first collaboration as writer-directors was the critically acclaimed short ROIG (1994), followed by El Dominio de los Sentidos (1996) and Atrapa-la (2000); they have also written a number of successful screenplays including the Goya nominated Sin Verguenza and La Isla del Holandes. They seem to have had a remarkably easy ride with Only Human, getting funding almost before they expected to, and taking begging phone calls from actors desperate to appear in the movie.

“I feel bad because this was very easy!” Theresa laughs. “The producers we had written for before, they produced some of the movies we wrote. So they asked what we were working on, we gave them the script and they loved it. They had worked with English backers on a previous project, so they contacted them and gave the script to the UK Film Council. And Robert Jones loved it, and that was that. It was great.”

Dominic agrees: “The script was everything. Either a script generates instant excitement or you know it’s going to be a long drudge. So it was luck and skill! It’s personal also – one producer will love it, another won’t – but a producer can make a project happen just like that.”

“In this case the script opened its own doors. In fact Guillermo Toledo, who plays Rafi – we weren’t thinking of him for the part, but he called on the phone because he’d got hold of the script, and he said it was the best thing he’d read in a long time and he wanted to be part of it. It was really nice and we felt like everyone wanted us to do the project.” Theresa adds.

The original plan was to film in London, where the film was set. I wondered what influenced the move to Spain, a country not well known for its Jewish population.

Dominic explains: “It was for practical reasons initially – we set it in London, then the producer says I like it, and I’ll produce you, but it can’t be in London, it has to be in Madrid. So it was an offer we couldn’t refuse. But thinking about it that night, we thought, actually, this is very fresh and original, because a Jewish family has never been portrayed in Spain, not in the cinema or even in the theatre.”

Theresa tells me that there are only about 15,000 Jews in Spain.

“It’s a small but very active and lively community. But a lot of Spaniards live ignorant of the fact that there are Spanish Jews. They think all the Jews left in 1492, they’re in Woody Allen movies. So we decided let’s go for it. Anyway, it’s such a universal story, it could be set in any community.”

The film has already been released in France and Turkey, and will be released in Italy at the same time as it opens in the UK. It’s doing very well internationally.

“The French liked it, so we’ll see if the English like it. It’s coming out in Italy at the same time. It’s been in Turkey and they liked it. So far its travelling well – its quite universal, I think.” Dominic says.

Everyone has a family, and all families are psychotic?

Only Human deals with some serious issues, but its also a farcical, hilarious screwball comedy. I wonder what draws them to this genre.

How hard is that to get right? The timing is so important.

“You can’t make it – it just happens like magic. When it happens on set, you laugh, and then you know you’re on the right track. There was a scene when Rafi is changing his shoes, and Gloria takes just a bit too long to ask why, when that happened on set I got goose pimples. But we’d done several takes and asked her to try something different and then this happened and it was magic.” Teresa continues.

“You have to do a lot of it in the editing room. Its all about pace and timing. That’s when you really see what’s funny or not. We got into some really big arguments with our editor – he was hacking at it and we were very insistent about the timing to make it funny.” Dominic says.

“Even five frames can make a difference.” Teresa agrees.

“Just the raising of an eyebrow – you want to cut these things out.” Dominic continues.

“And at that point it becomes very scientific.” Teresa adds.

“The editor got so tired of us he let us take over.” Dominic smiles.

Making the film a comedy seems to be liberating – it can deal with a difficult subject because its not taking itself too seriously.

Dominic agrees. “Yes, if you treated this as a drama, you would really have to be true almost documentary style, and then Rafi becomes the representative of the Palestinians, with the Dalinskys representing all Jews. Whereas with comedy, this is just an idiosyncratic family. I think these expectations can make for very dull drama.”

Teresa laughs. “Also with comedy you can be very ethically shifty.”

Despite everything that happens to them in the course of one crazy night in Madrid, Rafi and Leni are still together at the end of the film. Does the ending, cautiously optimistic as it is, reflect Teresa and Dominic’s view – can love conquer all? Is a happy ending possible for a couple like Rafi and Leni?

Dominic is a realist. “We didn’t want to say that love is the solution; all we wanted to say was that love is possible. We wanted to remind people that this is possible, and if it’s possible, what does that mean – there’s something so absurd about killing each other. People have sometimes seen this as a message movie and therefore a bit na?ve, and that wasn’t our intention.”

What will happen when they stop fancying each other? Will the relationship last?

They both laugh. “Not necessarily!” Dominic says.

“They have a lot of work ahead!” Teresa adds.

“Maybe out of the family context.” He concludes.

Maybe if they move to a different country?

The next project for Teresa and Dominic is a bittersweet comedy set in London, dealing with food issues. Called Eating Disorders, they are currently writing it to direct themselves. Dominic outlines the plot:

“It’s an ensemble film, three intertwined love stories where the big problems are all to do with food – conflicts over food. We’re trying to pack in every eating disorder. More disfunction, to do with the stomach.”

Theresa adds; “And we want to portray this foodie London, which has become –“

Ripe territory for these most astute observers of human frailty.