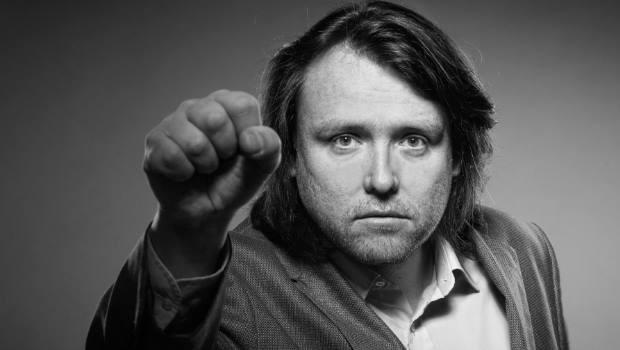 In early May 2003, ads began to go up in Prague announcing the opening of a new hypermarket, Cesky Sen (Czech Dream). Its simple, colourful posters (exhorting shoppers NOT to come, NOT to spend), catchy jingle, flyers, tv spots and competitive pricing caught the eye of the bargain hungry Czech consumers and on the opening day over 4,000 people turned up, hoping to get their mitts on a cheap tv or digital camera. They came away with something very different.

Co-director Filip Remunda explains it all: “When I first met my co-director, Vit Klusak, about 5 years ago, he told me about Petr Lorenc, who organised something similar to Czech Dream, in Prague. He put posters up on the underground for his brand new hypermarket, GIGADIGA, and invited families to the opening. When they got there they found a table saying ‘isn’t it better to have a short walk in nature’. It was an art project and I was full of enthusiasm for the idea and thought it was incredibly funny because at that time the Czech Republic was going through what was called ‘hypermarketomania’. Hypermarkets were growing like mushrooms, in four years more than 200 big shopping malls were built and it was like a sociological experiment because it changed the way people spent their free time.”

Hypermarkets are new to the Czech Republic but as we see in the film they have been embraced by the populace. 125 hypermarkets have been built in the last five years; it took 20 years to build the same number in Holland. Sunday and 24-hour opening has turned shopping from drudgery into a weird hobby; in the film a little girl resists going for a walk in the country and visibly relaxes when taken to a branch of Tescos. But the film is about more than just supermarkets.

“So we used his ideas, but did it on a bigger scale, acting as spies in the world of advertisers and see how they think about us consumers, how aware they are of our needs and desires. We are so unconscious of how interested corporations are in our shopping behaviour.”

So the film is really more a look at modern consumer habits and how these are identified and provoked by advertising? I had wondered if he had an issue with supermarkets, a score to settle – shelf-stacking related flashbacks perhaps – but supermarkets are just another product.

Filip laughs. “Its just a product, but it’s a very universal product, because you can find almost anything in a supermarket – for example in Poland, which is a very Catholic country, there are churches in the supermarkets. You can get married – so its about love, but its also erotic, because they have sex shops, you can eat there (recycled plastic pizza), go to the gym, to the pool, to the cinema – in some countries you can sleep there. It’s bizarre. A world of its own. So that’s why we picked the shopping mall – it’s a universal place. And if we replaced this universal place with nothing, there is a meaning, because there is a question.”

People clearly wanted to believe in Czech Dream. Some 4,280 people turned up to the opening. Remunda recalls: “When I first saw the ads for the hypermarket, I thought no one would believe it – it was very colourful, it looked like a fairytale, it was absolutely not convincing. When we opened in the morning, the sun was shining from behind the canvas, and I really didn’t believe that people would be fooled. But we’d created this hypermarket in people’s brains, and they really believed in this construction, in this fake world, in the Czech Dream brand, better than what they saw with their own eyes. The fiction was stronger than reality, and even when they were running through waist high grass, realising that there was just a canvas, some of them were looking for an underground entrance. Looking into the forest nearby. Hoping that the products were real even if the store was not.”

Absolute proof of the power of advertising? The ads for Czech Dream were very careful to discourage shoppers. They used negative slogans at all times and planted clues that to a discerning shopper would show that something wasn’t quite right.

“Some examples were absurd.” Remunda explains. “We had products like mineral water, beer and wine at a discount; meat was half the normal price; and then we had some absurd prices, like a television for 500 crowns, that’s about ?10, in the small print we said this was a seasonal television, solar powered, only to be used in tents on holidays, with a battery life of two days. So all that information should tell you that the price is absurd. The little details were designed to show people that things were suspicious. Also our campaign was based on negative information – do not come, do not spend – and people believed in it.”

But people still believed – or just saw TV ?10 and didn’t read the rest.

“People believed because we had the right exposure. We had the billboards in city centres, radio ads, major papers – so the advertising experts said, you can advertise nothing on this space and it will work, because its so powerful, so expensive, that no-one would think that this is a joke. And its very dangerous, if you have money you can convince people to commit suicide, to vote for you in an election – anything you want.”

The campaign was utterly convincing in its scale, with tv spots, billboards, a jingle, flyers, focus groups – all the trappings of a full-blown media spend. How did they pay for it?

“It was all done by barter,” he continues. “We would show how clever and ingenious they were. On a personal level, as you will see in the film, they’re the same age as we are and they have ambitions to be famous, they see themselves as film-makers, the only difference is that their films are 30 seconds long. So they wanted to get involved in the project to show off their creativity. Later on they realised that we were not working on any specific commercial for a company but making a documentary showing the negative aspects of their job, and they were a bit surprised.”

The advertising agency staff comes across as arrogant and patronising, the Czech equivalent of Shoreditch twats, and Remunda and Klusak show them up brilliantly. The pair appear in front of the cameras, transformed into hotshot businessmen with the aid of some hair gel and borrowed Hugo Boss suits. Remunda didn’t particularly enjoy the dressing up.

“That was difficult, because of the expensive suit, it was very tight. It was very restricting. It also absurdly changed our social position; Vit was on the train in Prague and he offered his seat to an old lady, and she said no, not you, because he was smart and good looking and looked rich. It was an interesting experience for us.”

Czech Dream opens at London’s ICA on June 24th and will be introduced by director Filip Remunda with a Q and A afterwards.