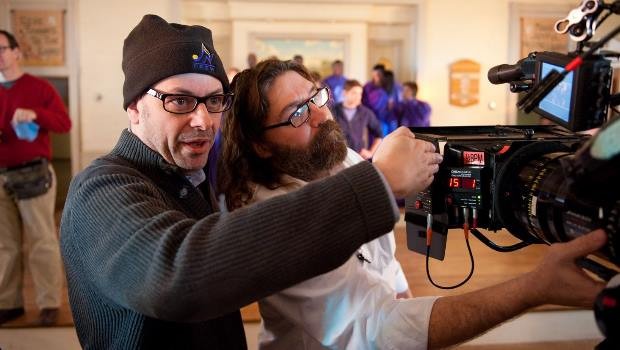 Director Todd Graff and the cast of Camp are doing a tour of Britain to promote the new musical. The cast are performing songs from the film in each location they visit and FutureMovies caught up with Graff in Edinburgh.

What kind of reaction have you had to the film?

So far, so good. I mean, it’s an odd little movie. It’s a gay children’s musical and there aren’t lot of those around. And it was made very cheaply, a 22-day schedule shot on tape – a real hardcore indie film. We couldn’t even put the kids up in hotels, they had to sleep at the camp on bunks.

Exactly. And none of the kids have ever been in a movie before, so I assumed it would just be an under-the-radar kind of film. But the first time anybody saw it was at Sundance and it got this gigantic reaction. We all a looked at each other and went, what do we have here? It’s been an amazing ride ever since.

Is it the film you envisaged?

It really is. I have to say that had I made it with a studio it would not be. But I made it with the Independent Film Channel and they gave me final cut, even though I’d never made a film before and for better or worse it is what it is. I didn’t have enough time or money to make the film I really envisioned, but that caveat aside it really is remarkably close to the movie I intended.

You were at Stagedoor Manor, the inspiration for Camp Ovation. So when did the idea for making a film about it come to you?

A really long time ago. Initially, I thought it might be a documentary but then I realised I’m not a documentarian, that’s not what I do. Finally, about five years ago I sat down and wrote it on spec. I have this whole other career as a Hollywood screenwriter that I was very disenchanted with, so I moved out of LA, back to New York, and decided I would direct myself and work independently.

Are we seeing a resurgence of the musical on film?

Are the kids’ experiences in the film based on actual events?

In broad strokes it’s very much like the real camp. In specifics, each character, although they have elements of kids I knew at the camp, they’re basically made up wholecloth. What’s very similar to the real place is the type of kid that goes there, that sort of weird, freak, misfit kid, and the type of shows they put on there – the insanely inappropriate nature of the shows. When I went to that camp they did Vampire Lesbians of Sodom. And it’s all children. We’re talking nine-year-olds.

In front of their families?!

In front of their families. A while back I discovered photographs of myself in a show where I was 13 but I looked about eight. I was a tiny little kid. And I’m in full drag in a kick line. I showed it to my father and asked, what were you thinking? He said: we were just so happy that you weren’t miserable anymore that we really didn’t care what it took. And I think that happens a lot there. There are a lot of kids who don’t have an easy time of it when they’re not at that camp, so the parents cut it a lot of slack just for making the kids happy.

Is the Bert character based on anyone?

No, he’s not. It seemed important to me to have a character that’s going to be the other side of it, who’s going to say, look, you’re in Bizarreworld here. Don’t trust this, it’s not necessarily going to work out well for you. But he wasn’t based on anyone specific who ever said that to me.

Was there a Todd Graf surrogate in the film?

I’m not proud of it particularly, and God knows I’m nowhere near as cute as Daniel Letterle. But the Vlad character, that sort of adolescent, manipulative, doesn’t really care about the consequences of his actions with an obsessive need to please – I definitely had that as a kid.

The child actors were all non-professionals. Did that make them easier or harder to direct?

In some ways it was easier, because I didn’t have to break them of a hundred bad habits. I really didn’t want to use professional showbiz kids, because they’re so cutesy and selling so hard. I just hate that stuff. I believe I got very honest, natural performances out of the kids, which was great. The hard thing was that it took them a long time to understand they were making a movie. The work ethic: they didn’t get it.

Were you kicking them out of bed?

Yeah, if they would show up! I had one girl who left the set for four days in the middle of shooting and went to the Caribbean, it was like, what, where were you?! I had to cut her out of three scenes! They didn’t get it on some level. Now they do. Now that the movie has blown up and they’re flying all over the world and doing press, now they’re like deer caught in headlights.

Were you quite strict when directing them?

Not necessarily strict. I haven’t been a teenager in a really long time, so it was important for me not to make them do or say things that didn’t seem to fit in their mouths. Leaving aside the big campy musical numbers which had to be what they were, in terms of who they were as characters in the scenes I would let them improvise a lot, then I would kind of take that and shape it into actual dialogue. So when I knew that at least as a fallback I had all the pieces I needed for a scene, then we would start doing takes where they could do whatever they felt they wanted. And sometimes we got really good stuff that way. Most of the time we didn’t, but sometimes we really did.

With your commitment to having Stephen Sondheim in the film and using certain songs, did you think: this is never going to get made?

When I wrote it, I felt that way. I thought no-one is ever going to finance this movie, it’s ludicrous. Who is going to put any money into this thing? Then Sondheim in particular responded so enthusiastically, saying that I could use any song in his catalogue for virtually nothing. I mean truly we had no budget. And although it took me four years to talk him into appearing in the film, because he’d never been in a film before, knowing that I had his imprimatur lent a credibility to the project. Because he is deified within musical theatre. And so I then went to all the other songwriters I wanted, and said, look Steve’s given us all these songs for nothing, whaddaya say? Everybody in that world wants to be involved with something he’s involved with, so suddenly, I had this actual movie that was somehow makeable. He was really instrumental in that.

We don’t really have the summer camp thing in the UK. Is Stagedoor Manor typical?

There are several that make an attempt at being what that place is, but that’s the only one that’s the real deal by a large leap. It attracts kids from all over the world and it’s hugely successful. They keep it small and they keep it strange. The shows that they do, the fact that they have no judgements at all about a kid’s sexual orientation – there are just as many boy-boy ridiculous adolescent infatuations, as there are boy-girl or girl-girl. Nobody judges, so it’s really unique.

As well as being entertaining, do you think the film says it’s ok to be a misfit?

I hope so. Listen, the movie is on one level just a little song, little dance, little salsa down your pants thing. I feel all pretentious if I talk about a message or whatever. But if there I something like that I’m hoping that if you’re a kid or you have a kid that doesn’t fit inside the box, the answer is not necessarily to stuff them into the box, it’s to make the box bigger. I don’t know a lot of kids or even any kids who are like those I see in Hollywood mall movies, where they all are great looking and great looking in exactly the same way. Nobody has bad skin. God forbid you’re the brunette, then you’re the best friend. Admittedly, some of those movies are great. Bring It On is a hilarious movie. But there are so many of them. And so many of them suck and they all seem to suck in the same way, so it just felt like if I can make one movie, if I can make it cheap enough – I don’t have to get the whole world to see it – that a kid like one of these kids can actually go to and see some kind of an image that’s like them, well, that’s got to be worthwhile.

Fame was obviously a touchstone. What other films influenced you?

There‘s a 70s movie by Michael Ritchie called Smile – it’s great, a hilarious satire of teenage beauty pageants in California, really sharp and really dry. The Bert character I ripped off completely from a character in that movie. And Hedwig – even though, God knows it couldn’t have been a more different film, in the way that it managed to walk a line between complete outrageousness and real heart. Who can relate to being a German botched transsexual? Yet I really cared about that character. And in fact, the guy who wrote all the songs for Hedwig wrote our score so that was a kind of sideways touchstone.

Can you tell me more about the tour you’re doing?

We did it in the States. Now we’re doing it here and I guess we’ll be doing it in other places around the world. Our movie has no movie stars, our movie is a really little movie. And it’s summer and it’s really hard to carve out a space for yourself. But I always told the distributors what we have are the kids. We don’t fake it. It’s not like Britney Spears and you manipulate it in the studio. They really sing that well, they really dance that well, they really are great kids that are just so not full of shit. So we travelled around, put together a bunch of songs, went into a studio and cut some really great tracks – not vocal tracks because they do all they’re singing live – but the backing tracks. And we’re going around and performing them. We’ll go to the opening of an envelope, we don’t care. The idea is to let people see how great they are.

Finally, can I ask you about the film you’re making on Brian Epstein?

The Epstein movie is called Tomorrow Never Knows and Jude Law, who plays Brian, is also one of the producers. It’s a biopic of Epstein but it’s not a Beatles movie, though they are in it. As are all the people from his personal life and his family, but it’s not a classic biopic. If there’s any kind of template for it then it’s probably All That Jazz – it’s really impressionistic. A lot takes place in Brian’s head and there are these big, bizarre musical numbers that Jude will do. It’s got a lot of really dark stuff, a lot of graphic sexuality.