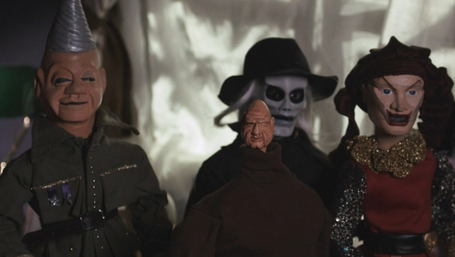 David DeCoteau is one of the most prolific names in low-budget genre cinema. Since his debut feature Dreamaniac in 1986, he’s directed over 80 movies including Creepozoids, Sorority Babes in the Slimeball Bowl-O-Rama, Dr Alien, Witchhouse and Test Tube Teens From the Year 2000. He’s also responsible for four entries in the popular Puppet Master series, including the recent Puppet Master: Axis of Evil. “I always want more!” he tells Matt McAllister.

You’re in the middle of shooting two movies at the moment is that right?

Puppet Master: Axis of Evil has just been released in the UK – though you’ve probably shot about six movies since you made it…

What new elements do you think Axis of Evil brings to the Puppet Master franchise?

It’s a film with a much bigger scope to it. It’s a period piece, and we attempted to re-create the epic feel of Puppet Master III, so we shot on location in China. I think it’s more of a character piece and has more of a serious tone than the previous movies.

How do you think Puppet Master has progressed over the series?

Well, I’ve only directed four of them and I really haven’t seen any of the others with the exception of Puppet Master and Puppet Master II. But I think its progression has depended on the budget level a lot of the time – sometimes it has been an impoverished budget and the films kind of smile at the cheapness! But it’s the premier franchise of Full Moon Features, so they try to give it a bit of tender loving care.

Is there a strict mythology to the series? It’s contradicted itself on a couple of occasions…

Well, I’m not involved in the development of the scripts. I’m really more of a director for hire. I delivered my cut of the film and it was finished by [Full Moon head honcho] Charles Band. It was really designed for Charlie to direct – I came on board because he was too busy to do it – it’s his company, his vision, his franchise.

You’ve been working with Charles Band since the days of Empire Pictures in the 1980s haven’t you?

Oh yeah. As a matter of fact I did my very first movie for him in 1986 when I was 24 years old – it was a film called Dreamaniac. Since then I’ve probably directed 30 movies for him. In fact, I’ve probably directed more movies for him than any other director – you know, he’s a good friend and I like working for him. It’s nice to work for a producer who champions crazy, oddball ideas and crazy storylines. He’s a hoot to work for!

Have you been part of the Full Moon Roadshow? It looks like a lot of fun…

I have! I’ve attended maybe six or seven of them throughout the years. Whenever Charlie invites me, I’m more than happy to join him on that trek across the country. It’s a lot of fun. It’s really great to meet the fans out there.

How do you think low-budget filmmaking has developed since you started?

Oh everything changes. Technology changes, the market changes, distribution systems change… Let me tell you something – it takes a lot of time and a lot of money to keep on top of the new technologies. Back in the day there was 35mm film and that’s how we shot movies, and that was a technology that changed very little. Now, with digital technology, it seems like it changes every month. To stay on top of that can be challenging, but so far it’s worked out pretty well for me.

I love change, I love a challenge, I love tracking new ways to make movies more efficiently or more affordably or with more dazzling effects. What you can do now with CGI is pretty incredible!

You’ve filmed over 80 movies in the last 25 years. Which were the most challenging?

I’m so ambitious that every movie becomes a challenge. I think Puppet Master III was difficult in that we were trying to re-create World War II Europe in Southern California! Period pieces, with the costumes and having to shoot on the Universal backlot, can be very challenging.

Also, doing Body Blow in the Philippines – that was a grand scale martial arts movie we had to shoot very quickly in Manila. That was pretty difficult!

But no shoot’s been easy. I always want more, I want it to be bigger, better – you really make a lot of demands on the cast and crew, and there’s a lot of stuff that needs to be taken care of, you know? So it’s rarely easy – I can’t think of one that hasn’t been somewhat challenging!

Would you like to be given an Avatar-sized budget just the once?

If you could remake any of your movies as a big-budget 3D extravaganza, what would it be and why?

Oh, probably Creepozoids – I think that could be an insane 3D production with lots of CGI creatures coming out at the camera. That would be great!

Talking of Creepozoids, that was one of a number of films you made with legendary scream queen Linnea Quigley. Do you have any plans to reunite with her?

I loved working with Linnea and we’re still friends. And as a matter of fact I just offered her a movie, but she wasn’t available, she was on another film. But we’re talking about working on a new movie real soon.

She’s a good friend, I’ve known her for almost 28 years, so we go way back, and she’s an absolutely doll – as are all the scream queens from back then, such as Michelle Bauer and Brinke Stevens [all three starred in DeCoteau’s Nightmare Sisters].

The financier of those films was a fan of the original material and so was I, so it was serendipitous how it all came together. It was basically a combination of our interests.

Do you have plans to do any more?

There’s been some discussion, but no firm plans yet. But we do have an absolute interest in continuing that series of movies.

Why do you work under so many pseudonyms? Over the years you’ve gone under the monikers of Victoria Sloane, Ellen Cabot, Jack Reed, H.L. Smokum and many others…

I did that back in the late 80s and early 90s, but I don’t any more. Back then it was because I had joined the Director’s Guild of America and was working on non-union movies, so I was changing up the names.

Also, I was working so much it made sense to change up the names a bit so I wasn’t flooding the marketplace with David DeCoteau movies. I was working in all the genres, so I gave each genre its own pseudonym!

Who have been the biggest influences on your career?

I started out working with Roger Corman back when I was 18 years old, so I learned the art of efficient filmmaking right from the moment I arrived in Los Angeles. Then of course Charlie Band gave me my first directing job, so I was able to learn the art of directing by doing it – those two men certainly had the biggest influence on my career. I owe them everything actually.

Why do you like working in the horror genre so much?

It’s a genre in which you can experiment – I’ve tried a lot of different types of things in that genre. And it helps that in international currency you can sell these films – it’s a crowded market now, but if it’s original and clever there’s a place for it. The horror genre has always been relatively commercial.

After 28 years in the industry and 80 films to your name, is there anything left you’d like to do?

But I’m not sure how that would come about because he’s had a big resurgence in his career with Lord of the Rings and Star Wars. He might be a little out of my price range with the current budgets I’m working with! But he’s really something, one of a kind…

Puppet Master: Axis of Evil is out now on DVD.