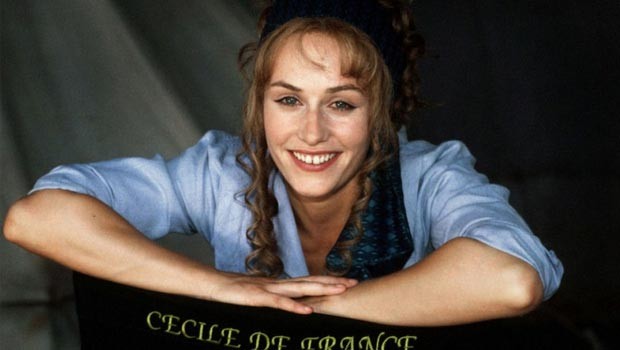 “Usually, I compare my character to an animal. And I think Monique is a fox.”

Like most British men of my era – anytime after the Norman conquest – I love the Gallic accent with a shallowness. Female especially. So when a young Belgian actress goes all vixen on me, I go a bit ‘Allo ‘Allo. But ah promeese zis does not affect my professionaleesm.

“She’s ready to do anything for her curiosity,” Cecile de France explains of her character in Frank The Waterboy Corachi’s adaptation of Jules Verne’s Around The World In 80 Days. “She’s driven, she wants to learn everything and she just does what she wants.”

Alongside Steve Coogan as Phileas Fogg and Jackie Chan as Passepartout, the 28-year-old plays a part quite unlike the Indian princess who was the novel’s original romantic interest.

“Monique is a French avant-garde painter who is not taken seriously by the Paris critics. She decides to join Phileas and Passepartout because she believes the wonders of the world will push her painting to new levels. She is not too girly, she loves life and wants to grow as an artist.”

As her first English language production and a family film with exotic locations, Around The World is markedly different from those in which de France made her name, having impressed in French psycho-killer thriller Switchblade Romance and won a Cesar for Most Promising Actress for her role as a Belgian lesbian in the Euro-comedy L’Auberge Espagnole, a sequel to which she is currently shooting.

“I felt a big responsibility on my shoulders because this was not my native language. I was lucky to work with an excellent dialogue coach who helped me to understand the rhythms of English, which are so different. But Monique is French, so we kept her as French as possible. And it’s an action film so we run a lot.”
Working with a physical perfectionist like Chan can be frustrating however.

“In the beginning I wanted to do some stunts, but Jackie said, oh no. No, no. But I kept asking and Frank said I could kick a Chinese warlord. So I did.

“Jackie’s choreography brings something so different to the novel, the way he is with his team, the way he’s so quick, the way all his ideas are working. All of his secrets, their technique. It’s a fantastic performance.”
De France, who moved to Paris when she was 17, was equally impressed by Coogan’s stagecraft.

“I was all the time in his trailer and I asked him, please show me your TV show. And I like it, very much. Even on set, I learned a lot from his comic timing.

“The love story is very interesting because they are so opposite. Phileas is a scientist but he’s very innocent. And Monique is an artist who seems to be very naïve but inside she’s strong. Phileas, I think, hates Monique at the beginning, but afterwards they discover they both have a dream: he wants to push science further, she wants to push art further.”

With British actors Jim Broadbent and Ewen Bremner in supporting roles, the film has almost as many cameos as the 1956 David Niven-starring version which coined the term. Kathy Bates plays Queen Victoria, Owen and Luke Wilson are the Wright Brothers, John Cleese is a London bobby and Richard Branson tends a balloon. Bless. Meanwhile, Arnold Schwarzenegger stretches credibility as a womanising governor. Or Prince Hapi as he’s credited. After sharing a hot tub in his Turkish harem, de France is generous: “I think he’s a good sport to wear that stupid wig, the baggy suit, a stupid guy who says don’t touch that statue of myself. I think he must have a lot of humour.”

A version of this article originally appeared in the List magazine, July 8-22.