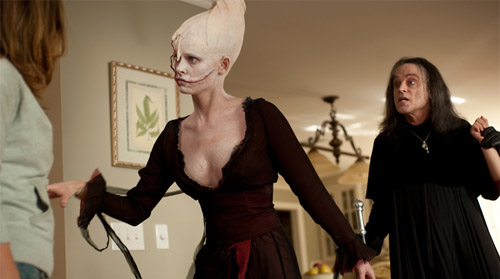 Director Brian A. Metcalf has combined his background in special effects with a lifelong love of fantasy and horror in Fading of the Cries – the ambitious tale of a teenage girl and a mysterious, sword-swinging hero who clash with an evil necromancer. With the Region 2 DVD out now, Metcalf told us more about the film’s background…

How did you find the experience of directing your first feature?

There were a lot of challenges – especially as I was acting as producer, director and visual effects supervisor. But despite having to wear so many hats, it was a really fun experience.

Where did the concept behind Fading of the Cries come from?

The initial idea came when I was a young child. I had a fascination with comic books, fantasy, horror and zombies, so I wanted to roll all of that into one film.

Do you consider the film more of a fantasy or a horror film?

Oh, it’s definitely a combination of everything. It’s fantasy, horror, action – it’s all of those things.

Which filmmakers have had a big impact on you?

Obviously George Romero, with Night of the Living Dead and Martin and so forth. Also, Lucio Fulci’s Italian horror films. I’m a huge fan of Frank Darabont as well. There are so many influences, it’s hard to name them all!

You mention Romero. Fading of the Cries almost feels like Night of the Living Dead crossed with Twilight at times…

In a sense. A lot of people have described it as very Twilight, but it’s a lot more visceral and violent than Twilight, and a lot more action based. Some of the people we’ve shown it to have actually been kind of surprised. They were like, “Oh, this isn’t like Twilight at all!” I mean, there isn’t any over the top gore but there’s certainly a lot more violence.

Considering the relatively low budget, it’s quite ambitious in terms of special effects isn’t it?

Yeah. I mean we did have to work with a limited budget but I didn’t want to deviate from what I wanted to do. I’ve worked in the special effects industry and was able to get together a team of top-notch effects artists. We all banded together and really set out to make the film as it was scripted. We have over a thousand effects shots, which is ambitious for any film!

Did you enjoy working with Brad Dourif?

It’s interesting; after I came up with the idea for the film many years ago, I actually made a trailer along with [star/producer] Thomas Ian Nicholas in 2002, when we were trying to get funding. There were times when it was going to happen, then it didn’t happen.

Back then I always saw Brad Dourif in the role because he has such an intensity to him and I was a huge fan of the Exorcist III where he played the Gemini Killer; he did such a fantastic job and I knew that I wanted to work with him. So it was a dream come true to get the chance to work with him. He happened to be at the same agency that Thomas had been at, so we were able to get through to him through there. It was fantastic when he read the script, liked it and said he would do it.

He brings such intensity to the role. I mean, I had ideas of how I wanted the character to be, and he really took it a step further with his experience. He did a fantastic job.

Alongside Brad the film has a cast of new younger actors. What were they like to work with?

They were all fantastic. They all worked really hard on the film, I felt. This was Jordan Matthews’ first major role, and he worked a lot with Brad – the two of them did hours and hours and weeks and weeks of sword training, they worked around the clock on it! And then all of the other young actors – Hallee Hirsh, Elaine Hendrix, Mackenzie Rosman – they all got it right away.

Do you see Fading of the Cries as a standalone movie or the first part in a series?

I actually wrote it as one really long film and broke it up into three sections. It ends in a way that, if it’s not successful enough, it can work as a complete film – you don’t feel jipped. But at the same time if it is successful, we can go on to do two more.

Do you see yourself as more of a writer, a director or both?

I love writing. When I’m doing that I’m imagining it on paper, and thinking things out. Then I feel like I actually have to direct it so I can visualise it and put it into place. And I actually like to edit.

They say you make a film three times – writing, directing and then editing. And so in order for me to feel like I have complete control I have to have to do all three. So if the movie sucks then I have no one else to blame!

Fading of the Cries is out now on DVD (region 2).