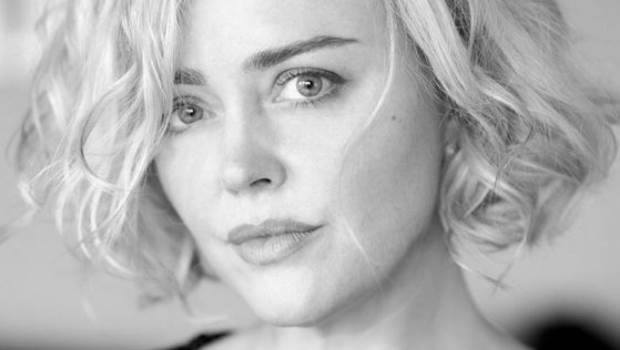 All human life in one day and one film.

It’s literature’s greatest affirmation, the most joyous poetic release and a climax that shook the world when it arrived in 1922. Lying in bed, recalling her romantic life in expressive, sensual detail, Molly Bloom’s soliloquy, that breathless final chapter of Ulysses, is some of the most captivating prose ever written. Yet it’s taken over 80 years to fulfil James Joyce’s hope of Molly gasping that famous “Yes” to a mainstream cinema audience.

“Initially, I felt a mixture of pride and terror,” says Angeline Ball about her casting in Bloom, director Sean Walsh’s audacious attempt to adapt the unfilmable with a budget of just £3.5 million. As the earthy, plain-speaking Molly, Ball stars alongside a lugubrious Stephen Rea as Bloom and the boyish Hugh O’Connor as poet and Joycean self-portrait Stephen Dedalus.

Photo of “I saw Bloom as my swansong,” admits the actress who won an IFTA award, an Irish Bafta for her performance. “I thought it would be amazing for my career or ruin it if I didn’t get it right. It might have been terribly different.”

It was Joyce who opened Dublin’s first cinema in 1909. And he discussed adapting Ulysses with the Soviet director Sergei Eisenstein, though he thought “the book could not be made into a film with artistic propriety”. Set on a single date in Dublin’s history, June 16, 1904, the day Joyce and Molly’s prototype, his wife-to-be Nora, met for their first date, Ulysses was the Irishman’s own appropriation of Homer’s Odyssey, a mock-heroic life in the day of Jewish ad canvasser Leopold Bloom. As humorous, humane and suffused with the ordinary as it is the extraordinary, the encyclopaedic and experimental, Ulysses is packed with music, jokes, allusions and “so many enigmas and puzzles that it will keep the professors busy for centuries arguing over what I meant”. For many would-be readers, these flourishes and the intellectual flash of Stephen Dedalus’ early thoughts serve to return the novel to the bookshelf long before Bloom is introduced in the fourth chapter.

“How can a novel be so well known and regarded, yet nobody I knew had ever read the damn thing?” asks Walsh. “The way some have hijacked Joyce and made him an inner sanctum of insider knowledge is painful because the book is as relevant today as it ever was.

“I never went to university. I was an everyman coming to this great tome. But the more I read and the more I saw of the puzzles, the jokes, the little tricks he plays, the more I realised what an important task it was to open it up.”

Walsh declines to discuss the only previous attempt to film the novel, American director Joseph Strick’s more literal and sometimes impenetrable 1967 Ulysses, banned in Ireland until 2000 and unseen by all but committed Joyceans. But he does maintain that “Bloom is opening art up to a wider audience, whether people like it or not. Here is this hidden treasure and I can get you to the end of it, via a film. That’s not been done before I don’t think.”

Even so, every word in Bloom remains Joyce’s. Walsh has simply changed the chronology, excised several episodes and favours Molly and Poldy’s relationships over Stephen’s smart-Erse scholarship. Most strikingly though, Molly’s soliloquy now bookends the story, head to toe like the couple in the marital bed.

“Generally, I prefer the simpler, more human bits of Ulysses,” explains Walsh. “If we’d only had Molly at the end it would have been a disaster. She eases us in and lets us meet one of the great characters up front.”

Ball had been unfamiliar with the novel before Rea encouraged her to audition, but quickly appreciated the challenge she was facing.

“Molly is so ingrained in Irish history,” she reflects. “Everyone’s perception of her is different, so to make her physical and take her to a broader audience was extremely daunting. I was aware of a huge Joycean following out there watching my every move.

“Audiences can either attach to her or attack her really, because reading the book or watching the movie, you warm to Bloom’s internal thoughts. The way Stephen plays him there’s something downtrodden, something sad and melancholy. To have this woman saying she’s cheating on him and doesn’t care, you’re setting yourself up for an audience to hate you. So there was a fine balance between doing it with humour and naivety, aggression and confidence.”

“I still consider some of the dialogue to be slightly bawdy and crude,” she explains. “I approached Sean after reading the script and said I didn’t want to do any naked scenes because I think the text speaks for itself and there’s sensuality in suggestion. And he agreed. It’s not that I was afraid of being nude. We did do two or threes scenes that didn’t make it to the final cut. The scene where she climbs on Bloom’s face I was worried about but we got around it. The framing has it saying exactly what it’s saying in the book, but it’s not explicit really.”

Bloom wasn’t the only one she was keeping in the dark.

“I found out I was pregnant on the day I flew to Dublin, which was a surprise, a wonderful surprise,” she reveals. “I made up my mind not to tell anyone, not because I wanted to deceive them in any way. I just didn’t want them mollycoddling me if you’ll excuse the pun, because everyone was pulling together on such a tight budget. And the good thing was that I got very rotund in a way, my breasts grew, which was fabulous for Molly. I had to separate the maternal thing from my mind though, because I didn’t want to connect Molly’s loss of a son with my unborn daughter.”

Walsh certainly appreciated Ball’s contribution to an artistic endeavour that took him ten years to realise, three more than Joyce needed to write the novel.

“Nobody believed I could make this film,” he recalls. “My first feature film, based on James Joyce’s Ulysses, complex copyright, period costume drama, independent budget. They thought there were too many ducks in a row lined up to be shot. And they were right. Except they weren’t.

“I never had concerns about Angeline. For Molly you need two things. You need a look and you need a sound. Angeline just has that sound, naturally. A lot of people, when they heard I’d cast her, only knew her from The Commitments and said ‘oh, you’re in trouble there.’ But they hadn’t heard what I’d heard, which was Angeline doing Molly’s soliloquy spontaneously. Ninety-Five per cent of her voiceover is from a first take and that’s who Molly is. If you rehearse too much you’re going to lose her essence.

“Molly has this image and it’s that sex is the only thing on the agenda. In my view, she’s very much the mirror image of Leopold Bloom. Creative. Witty. Intelligent. Pragmatic. Sad. Happy. All of those things. She’s just as modern as Bloom I think.”

There have been a few dissenting voices, but most Joyceans have expressed admiration for Walsh’s efforts. Senator David Norris, a former Professor of English at Trinity College, Dublin, has declared: “Walsh and his talented team approach Joyce using the visual vocabulary of the cinema in a manner I have no doubt Joyce himself would have approved. Stephen Rea provides a masterly and brilliant evocation of Bloom managing to convey at the same time his Irishness, his Jewishness, his cosmopolitanism and his humanity while Angeline Ball is quite the best of all the myriad of Molly Blooms that I have seen.”

“I get invited all over the world whenever Bloomsday comes around,” laughs Ball. “Women come up to me after seeing it and tell me they really loved Molly, but men love her too. It’s unusual to get the two together, the women liking her because she speaks her mind and feels comfortable with her body and the men because she’s so free with her sexuality.

“And I really love our ending. Lots of people asked how I was going to handle the screaming, but I’d never heard it like that in my head. I thought it was meant to be tender and so I’m proud because this is something new. When people imagine the ‘yes, yes, yes’, I like the fact that it just flows away, like the sea.”

A version of this article originally appeared in the Scotsman, June 3, 2006.