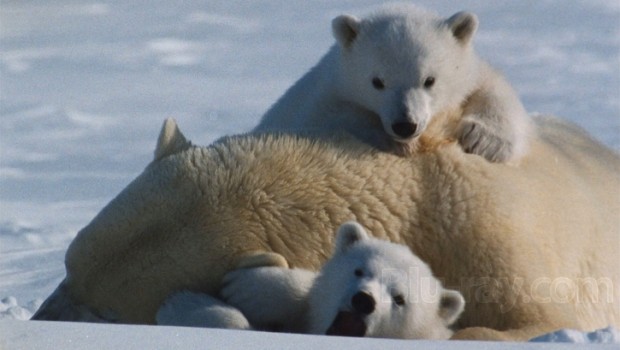 Co-directors Sarah Robertson and Adam Ravetch spent 10 years creating Arctic Tale, an epic new wildlife adventure on the big screen. The married couple shot 800 hours of footage and spent two and a half years in the edit room to carefully construct a new genre of movie. They talk to Adam Tanswell about their journey…

First of all, tell us about the movie…

Sarah: Arctic Tale is a coming of age story about a little polar bear cub and a walrus calf. They are growing up at their mothers’ heels in a paradise on Earth – the Arctic. But paradise starts to crumble and melt around them, so they have to go beyond what their mothers’ taught them to learn how to survive.

Why did you choose walruses and polar bears?

Sarah: We were attracted to the parallel between the two animals and the maternal investment for them both. It takes so much to learn how to be a polar bear and a walrus that they need three years of teaching and instruction from their mothers. This is very unusual in the animal kingdom.

Adam: I also think the walrus family connects directly with humans because the walrus herd is a gregarious social society very similar to humans.

Is Arctic Tale a documentary or a drama?

Sarah: The lead characters of Nanu and Seela in the movie are composite characters. It would have been impossible to follow the same animals for eight years, which is the duration of the movie. For us, they represent the best of polar bears and walruses that we’ve ever seen out in the field. We wanted to make a very strong character-based narrative and show animals that have to make single decisions in the moment rather than a general description of bears and walrus and the general idea of climate change.

How did you get to the remote Arctic locations where you filmed the footage?

Sarah: You have to take a dog team pulling a boat to the flow edge and then you have to get the boat in the water and start ice breaking. You travel 60 miles into the ice pack and you have to live out there and spend enough time so that you can find the animals. And then you have to habituate the animals to our presence there, so it’s a very complicated process.

Adam: It can be very dangerous. We would have to haul our boat on to the ice where we slept for the night, but I remember waking up one morning to discover the boat had gone. The ice had broken off, taken our boat with it, so we were left drifting for 72 hours.

Didn’t you have any communication equipment with you?

Adam: This was before we had GPS and satellite phones – all we had was a radio. We were finally rescued but it was just by chance they could find us. We only had a day’s worth of food, so we didn’t eat for 72 hours. There were no animals around us so we couldn’t hunt for food either. But in that time, we continued filming and we got some of the most amazing imagery.

Did you have to get into the water for some of the shots?

Adam: I was trained as an underwater cinematographer, so I dived down in a dry suit to shoot some of the film. When I first encountered a walrus, I was told that it was an animal that could hold you against your will and knock your head off with one smack of its tusk. It’s 2,000lbs and 13 to 14 feet long, with huge broad flippers. We had to go really slow and we learned as we went along how to approach them. Finally we got the mother to accept our presence and got these remarkable images inches from them.

What was the most challenging aspect of production?

Adam: I think the biggest misconception about the Arctic is the weather. It’s terrible dealing with the elements. How do you work at 40 below? How do you make your cameras work? How do you cook your food at night after a 20-hour day? How do you get up in the morning and get motivated when it’s been blizzarding for weeks at a time. That was definitely the biggest challenge – but it was all worth it.