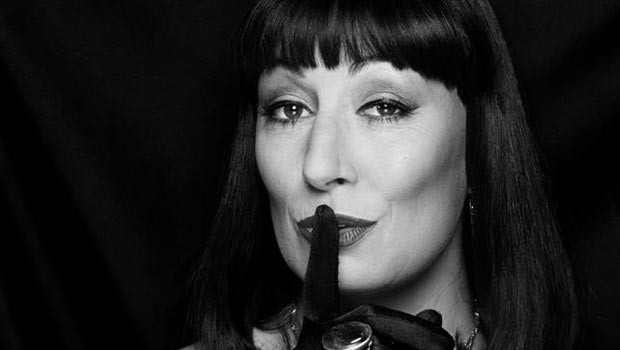 I’m sitting at the back of the conference room on a little stage, drinking tea, when I catch a glimpse of slim bottle green velvet thigh and a swish of long black hair in the doorway. No way can that be Anjelica Huston, I think. Must be her daughter or her assistant. But it is! And I have to say, I don’t know what she’s on but she’s certainly getting old gracefully – as if it’s not enough to be a fantastically talented actress and member of a legendary dynasty. Tcha! Some people have all the luck.

Anyway, Angel, as she’s apparently known, is looking fine as wine in a bottle green trouser suit and lighter green shirt with dark brown boots, while Wes Anderson cuts slightly less of a dash in his tweed and pringle ensemble; his tailoring seems to be based on a kind of ‘geek with money mated with Giles from Buffy’ look, and he looks so young! (I think Future Movies needs to talk fashion more, and will be reporting from Wednesday’s Shall We Dance premiere on the big-bummed one’s latest sartorial crimes – watch this space.)

Wes and Angel obviously get on well, bounce ideas and reminisences off each other, laugh a lot and generally seem not to be bored, which is nice.

Q: Anjelica, is Wes a genius? And do you like life on the ocean wave?

Anjelica Huston: Yes. Though I like beaches and the seaside more than the deep seas and open ocean. I like working with Wes because he’s very intelligent and his movies have a particular smart sensibility, which is beautiful to me.

Q: And of course it must be flattering to have a part specially written for you?

Anjelica Huston: Yes, and more so after working in a cramped house in Harlem on Tenenbaums – the idea of working outside really appealed.

Q: Wes, this is your most complex movie to date – the mid-life crisis, the Moby Dick theme – yet apparently the idea is 14 years old?

Wes Anderson: Not really. It was a character description that I wrote at college as the beginning of a short story, but wasn’t intended to be a movie at that point. Owen Wilson actually was the one who kept reminding me about it and eventually I went back to it, and when I was filming Anjelica and Bill together on Tenebaums, there was a chemistry there, and it set off a spark.

Q: Bill Murray can make you laugh by doing nothing. From observing him, any ideas how?

Anjelica Huston: He has a method all of his own. He is a very strong character who likes people to stand up to him – he can steam-roller people. He’s a man of mystery but also charming and very smart.

Wes Anderson: He’s like a force of nature; kind of heroic, very charismatic. He’s very confident and comfortable with himself and he’s not scared of anything.

Q: What inspired the walking sequence at the end of the film? And are you a Jacques Cousteau fan?

Wes Anderson: I love Jacques Cousteau, his persona and his films. The irony was that I wanted to dedicate the film to him but the Cousteau Society made this a legal disclaimer – that was more important to them

The walking sequence was filmed on a breakwater in Naples harbour – there wasn’t a lot else you could do on it but walk.

Anjelica Huston: I grew up on Cousteau’s films and particularly remember them for their bittersweet quality

Q: Anjelica, I read that you are planning to make a documentary about your father?

Anjelica Huston: I was recently given 120 hours of audio tape belonging to my father which I haven’t listened to yet, but which would be a place to start. I’d like to do something with my father narrating, talking about his work.

Q: What was it like working with Bud Cort?

Wes Anderson: I’ve always liked Bud’s work not just in the classics but in recent films like Heat and Pollack, so I wrote the part for him after meeting him at a party.

Anjelica Huston: Bud went a little bit crazy on set but it was Wes’s fault – Bud learned Indonesian intensively for two months, locked in his room, in preparation for the pirate scene. Then the pirates turned out to be from the Philippines….

Wes Anderson: So he was a bit upset… But there weren’t many Indonesians in Rome.

Wes Anderson: Steeped in Fellini, and totally unlike working in the US. Different strengths, different weaknesses. The scenic work and art direction was amazingly detailed and carefully done. And great lunches.

Q: Anjelica, how did you find filming in the winter in summer clothes.

Anjelica Huston: Mostly fine, but it got colder and colder. In one scene I insisted on wearing a wetsuit. And the costume designer said Wes doesn’t want you to wear a wetsuit. And I said, I don’t care, I’m wearing one.

Wes Anderson: And that was your last day filming.

Q: Wes, you’ve worked with some great actors. Is there anyone else you’d like to work with? That you’d write a role for?