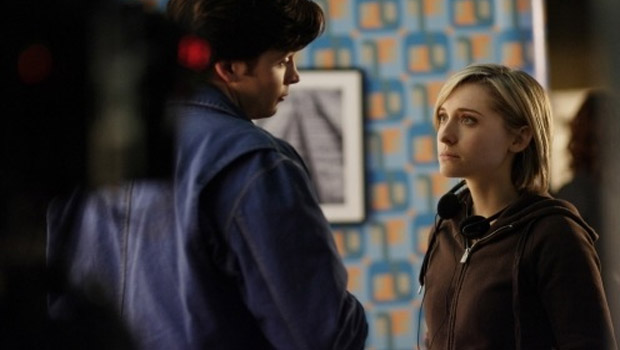 How excited are you about the new season of Smallville?
It’s very exciting for me for a number a different reasons. Firstly, I’m directing this year (episode 13 “Power”) so that’s a totally different approach to the show and a really different way of looking at just being on set. And secondly, our producers have really good taste and they’ve cast three really awesome actors to come and help us out this year. I’m totally looking forward to working with new and different people because I think they bring a lot to the table. I also think that the show is getting a lot darker. We’re all adults now, so we can play things that are much more controversial and a little bit edgier. I like that. I think that’s really fun.

Why were you chosen to direct this season?
Well, Tom Welling directed a few years ago. I think he has directed every season, so he broke the ice as far as it being allowed. Michael Rosenbaum also directed two years ago, so it became more of a trend. When I was first invited to direct, I thought, ‘I’m so not interested in directing.’ But then I had a really good sit down talk with myself and a couple of mentors of mine – and they all said: “Do it. Do it all. If you love making things, do it. Even if you don’t want to be a director after this experience, do it just to learn about yourself and about what it means to make a movie.” Another friend of mine said something to me that really resonated. He talked about how I will never again have 150 of the most skilled professionals in one place wanting me to succeed the way I have on this show. So why not do it?

You clearly know your character, Chloe, but do you have much input into what she says or where she’s going this season?
Well, I try to stay as true to the script as I can because I think that’s my job as an actor. Unless I’m doing an improvised film, I like to stay true to what is given to me. But the writers are incredibly open to our ideas. We know they’re only a phone call away if we have something that we want to see more of or less of – or there’s a direction we’d like to see the character go in.

We’ve heard a rumour there’s a love triangle for your character this year…
Yes, they’re spicing things up a little bit. Clark is out! No, I’m just kidding. He’s always there – but we’ve introduced Sam [Witwer] this year, who will go on to play Doomsday. His character, Davis Bloom, is very interested in Chloe right away. Chloe is a little flustered and taken aback by this dashing man who enters her life. But then she has Jimmy, who is this beautiful support system that she is engaged to and is committed to. So there’s a struggle for Chloe between the dark, mysterious, new guy and the tried and true safe guy.

What else is in store for your character this season?
Chloe is not working at the Daily Planet anymore, so I’m spending most of my time at the Isis Foundation. I’m running a support system/halfway house/counselling centre for meteor-infected people. She’s got the relationship with Jimmy that is continuing and then she has the relationship with Clark that she’s still continuing to try to uphold. She’s also got a lot of other really interesting things happening to her. Her encounter with Brainiac at the end of last season affected her in a way that she didn’t expect, so there are some physical things that are going on for her that she’s trying to get a handle on. She’s trying to figure out how to deal with. I also get kidnapped and locked down.

You guys have been filming in Vancouver for a long time… Does the city bother to stop when you film on the street anymore – or are they used to it now?
No, they totally stop. Actually, the funniest thing happened when Tom was directing an episode a while ago. I was doing a scene with Kristen outside, but somebody kept driving by and yelling, “Cut”. So we kept cutting and Tom would say, “Why do we keep cutting?” I’d tell him that it’s because someone’s yelling cut, but we didn’t realise it was just like a random fan going past. We don’t film out on the street very often. We’re in the studio most of the time and we’ve got a backlot that we’ve built, so people still get pretty jazzed about it when we’re not on our own sets.

After almost 10 years working on the show, how do you keep it fresh?
I think it’s just a matter of having integrity with myself around the whole idea that it’s my job and I get paid to be there. I get paid to do the best job that I can do and to keep it as exciting and fresh and interesting as I can. If I don’t do that, then I’m stealing and that’s not okay.

Are you interested in comic books or any sci-fi shows?
I’ve never been a comic book person because it’s just not my gig. And I don’t even have a television!

Are you internet savvy, Allison?
I’m really getting interested in the internet. It’s the coolest thing. I have a blog and I post every day now. I feel like I’m having this massive dinner party every night with the community that I’m building. We just get together and discuss the most interesting, exciting things.

Welcome to the 21st century…
Dude, thank you. It’s taken me a while, but I have my Mac book now and I’m editing together films and it’s great. This is the coolest thing. I love it.

What’s the name of your blog?
It’s just AllisonMack.com. It’s really cool. It’s so much fun. Check it out!

Catch Allison in Smallville on E4.