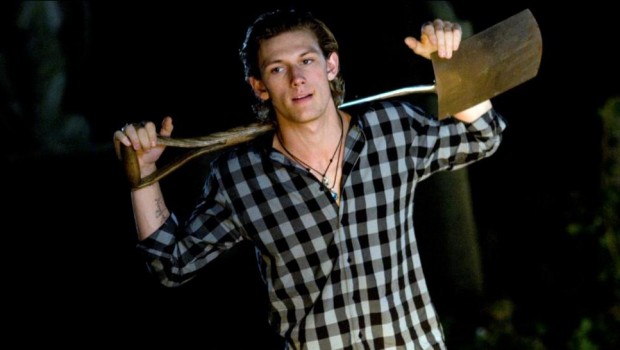 After playing teen spy Alex Rider in the Stormbreaker movie, based on Anthony Horowitz’s hugely successful novel, Alex Pettyfer has changed direction with the tongue-in-cheek British slasher Tormented. Pettyfer plays Bradley, a school bully who, along with his classmates, finds himself stalked by what appears to be a deceased bullied schoolboy. The actor talked to Matt McAllister about embracing the dark side…

Would you say that school bully Bradley is the central ‘villain’ of Tormented?

He’s a pretty harsh man; a bit of a psychopath in fact! But I think you do end up having a certain sympathy for him at times. Especially when he breaks down in that sequence in the car – you can see he’s actually a vulnerable character. I think most bullies probably are.

Did you relish the chance to take on such a different role after Stormbreaker?

Yes, I loved the fact that I could do a role that scared and challenged me. It took a lot of time and energy out of me. It was a type of role I hadn’t done before, and I thought that I could do it justice. I hope I did!

Did you draw on any experiences from your own school days?

I wasn’t at school long enough to draw on any real experience! I built up the character from studying the script. And I also watched a lot of Brian DePalma movies – the characters are so important in his films.

Were you a big fan of horror movies beforehand?

No, actually I’m a big wuss! Even with Tormented I’ve had to watch it through my fingers! But I love making horror movies – I’d definitely like to make another one.

Was it fun working with messy special effects?

Oh, the prosthetics were awesome. And you learn something different on every film that you do. With Tormented I saw how the horror genre uses so many effects and prosthetics – that it’s all fake and I don’t have to be scared! But I didn’t have as much make-up as my fellow classmates. Tom Hopper was in the chair for about two hours to get his eyeball pierced. And Lerissa, who gets her hand chopped off in the guillotine – she underwent a lot of make-up! So maybe I escaped lightly…

Did the Tormented shoot feel very different to Stormbreaker?

Well, obviously the budget was much lower on Tormented. But that helped make it feel more like a family on set, so actually it was great.

Tormented is out on DVD (region 2) on 28 September 2009 from Pathe Productions Ltd.