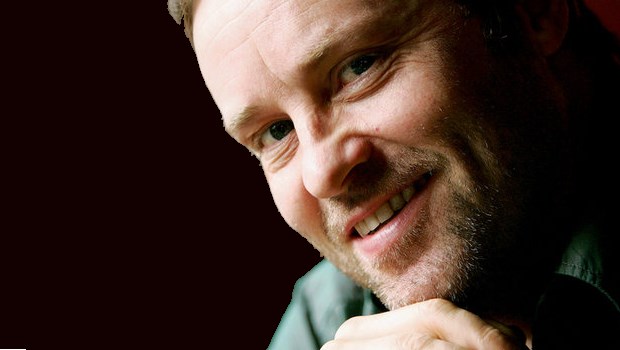 The global economic downturn may have crippled the Celtic Tiger, but the traditional Irish export of absurdist storytelling is alive and well. Currently touring the US with fellow comedians Dylan Moran and Tommy Tiernan as part of The Three Fellas, Ardal O’Hanlon has drastically cut the number of jokes in his set and outsourced some of his gag-writing to India, craving indulgence for all his new material about arranged marriages.

This fortnight though, the former Father Ted star can be seen in Wide Open Spaces at the Edinburgh International Film Festival. Co-starring the Scottish actor Ewen Bremner, scripted by O’Hanlon’s former Ted cohort Arthur Mathews and directed by Tom Hall, it’s a bleakly funny, belated coming of age comedy, an indictment of what O’Hanlon describes as “the ridiculousness of Irish people getting involved in business ventures”.

A pair of directionless, thirty-something friends evicted from their flat, he and Bremner become the builders and debt enforcers of an Irish Famine theme park run by a businessman who idolises Ryanair CEO Michael O’Leary. Part-funded by the Scottish production company Mead Kerr, Scottish Screen and BBC Scotland, Wide Open Spaces was shot almost exclusively in a barren quarry in the ironically monickered Prosperous in County Kildare. Notwithstanding an incongruously pink coffin ship and glimpses of George Best, the film seems almost entirely washed of hope by the rain-saturated slate grey landscape.

“There’s nothing big in this movie, no noise in it, no shouting,” the softly-spoken O’Hanlon enthused when I talked to him in Dublin recently. Having just interrupted his hectic filming schedule of an Irish sitcom to perform a few stand-up sets amidst the “frenzy” of the Kilkenny Comedy Festival, he recalls the shoot fondly.

“It’s all very deadpan and set in a surreal landscape,” he explains. “I think we all shared a love and delight in Scandinavian movies, so that bleakness and the stillness of our characters reflects that. The weather was extreme, Siberian practically, but it galvanised us to all muck in, like Shackleton and his crew or something.

“We still perceive ourselves as a very feckless people in Ireland. Spirited is the wrong word, but as poets and dreamers. So that’s why it’s doubly ridiculous for us to be involved in corporate matters. To many people in Ireland, Michael O’Leary is a hero and that just seems ludicrous.”

Following several “tiny parts in obscure films”, including Greyfriars Bobby and The Butcher Boy, Wide Open Spaces represents O’Hanlon’s first cinematic lead. Yet despite writing a surprisingly grim novel in 1998, The Talk of the Town, and more recently, playing a seedy teacher infatuated with a pupil in the Channel 4 teen drama Skins, he seemed doomed to typecasting as the hapless innocent, a character he first embodied as Father Dougal Maguire and then consolidated as Thermoman in the BBC’s My Hero.

It was his bewildered stand-up persona that convinced Mathews and Ted co-creator Graham Linehan to cast O’Hanlon as Dougal and he concedes that his stand-up hasn’t developed as far from the idiot priest as he’d have wished. More than a decade after Ted finished, he is still begged to sing the sitcom’s infamous Eurovision entry ‘My Lovely Horse’ at gigs and could have been forgiven for howling when he learned that the song’s composer, Neil Hannon of the Divine Comedy, would be scoring Wide Open Spaces.

Yet the film’s soundtrack is as understated as the cinematography, and besides, O’Hanlon is content to consider himself a jobbing actor now, a profession he was reluctant to accept when I interviewed him four years ago. He describes the character of Myles as “ramrod straight”.

“He actually came fairly naturally to me,” he explains. “I mean I generally sport the unshaven look and that seemed to suit him. Myles has a genteel shabbiness about him.

“I guess his crabbiness may surprise some people, inevitably, but I hope it doesn’t disappoint them. The script is hilarious and Ewen more than makes up for any shortfall on my part, he brings a lot of physical comedy to the role that wasn’t there initially. It’s a very funny film but it’s not me who’s providing the laughs. I’m the straight man, Ewen’s the clown.”

The role of Austin was originally intended for Moran. But explains O’Hanlon, “Ewen has a very different energy to Dylan, radically different, he brought such intensity to it that it’s a different beast entirely.

“He’s very methodical and has amazing integrity as an actor. Any spare moments we would snatch to work on scenes until he was happy. I would take my cue from him based on his greater experience, but we decided early on to play it very naturalistically, no big histrionics. We were ruthless in removing any obvious written gag, because what works in a sitcom can really hold up the story of a film”.

So is he actively seeking roles that are radically different to Dougal?

“Yes and no,” he replies. “I don’t actively do anything. Like a lot of sensible people I try to hide from the world as much as possible. But in terms of career, yes. I hugely enjoyed my time on Father Ted and My Hero and it was a massive part of my life playing stupid characters in fairly broad sitcoms. They opened so many doors for me and I have so much to thank them for, but I need to do different things.

“With the best will in the world, Ted and My Hero weren’t really acting, I wasn’t bringing an awful lot of nuance to them. I’m not making light of the work everyone did on them, but performing in front of a live audience, everything is heightened and you’re reacting to them to a degree.”

All of which may be true, but in the sequence where a disgruntled marching band attacks Myles or two bored, virtually anorexic girls playing starving famine sufferers turn their noses up at Austin’s sandwiches, Ted’s absurdity survives through the idiosyncrasy of Mathews’ imagination.

“Arthur is a deep thinker with a very individual, quirky outlook on life” O’Hanlon explains. “As well as being an authority on all things comic, comic books, the history of TV comedy and having an encyclopaedic knowledge of movies generally, he’s a collector. I’ve never seen his bedroom but I can only imagine what it’s like. He absorbs weird trivia and titbits from newspapers and magazines, some of which ended up in Father Ted and plenty of which turn up in Wide Open Spaces.”

A version of this article originally appeared in The Scotsman, June 13, 2009.