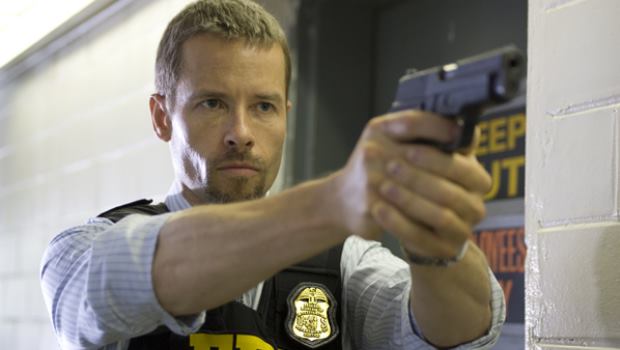 Summary: Offers a hint of the way religious teachings can be used to fuel the actions of both sides at conflict.

Don Cheadle and Guy Pearce lend their respected acting talents to an international thriller centering on the challenges faced fighting global terrorism in Traitor. The pair play men on the same side but opposed by their methods to track down the head of a major Islamic terrorist group, and come face-to-face in their individual pursuits amid a destructive plot to rock America’s position as a global superpower. It’s a serious subject, surprisingly co-written by comic actor Steve Martin, which can’t bring enough intrigue to the screen to keep you on the edge of your seat.

Cheadle, who helped produce the movie, clearly has a lot of interest in Traitor’s subject. He takes on the role of Samir Horn, a devout American Muslim and former U.S. Special Operations officer. Now he’s working for the other side, delivering C4 to a terrorist faction in Yemen most likely intending to use them for bombings. A confident supplier, Samir uses his skills to survive an ambush by American forces who take him prisoner and call him in for questioning. In steps straight-talking FBI agent Roy Clayton (Pearce) and partner Max Archer (McDonough), who fail to get any information out of the stubborn Samir who finds himself thrown into a local prison. There he befriends Omar (Taghmaoui) who invites him to join him in a breakout and finds himself working for one of the most respected terrorist leaders and acts as the brains behind the bombing of an American Consulate in Nice. Meanwhile, Clayton’s investigations keep crossing paths with Samir’s movements as he starts to wonder if Samir is a disaffected former military operative or a man putting his faith in another method of bringing the terrorists to justice.

Pearce’s performance echoes that of his L.A. Confidential character: hard-nosed and to-the-point, much like Traitor. The depiction of the F.B.I. is one of tireless efforts bringing them few clues, suggesting the terrorist circle is a near-impossible one to break into. Neither Clayton nor Archer have any signs of getting closer to a suspect until Samir crops up again and again. Their one useful contact comes from contact with Carter (Jeff Daniels), a veteran C.I.A. contractor who holds the knowledge it is easy to guess: that Samir is one of his operatives in a prime position to finally make a lasting impact on the terrorist group he has been painstakingly become integrated into until now. The problem is, he can’t reveal anything now or he risks blowing Samir’s cover just when it is crucial it remains a secret.

This logistical understanding of Samir’s position is a dowdy element to Traitor which often threatens to cause you to switch off completely. There are far too many scenes of Clayton and Archer sitting around desks or pointing at screens talking about what is happening from their perspective. We’ve all seen plenty of espionage thrillers to know the real interest comes from the operatives in the field; thankfully Cheadle’s Samir injects the necessary conflicts between morals, religion and duty to sustain the suspense.

Samir is a strong believer in Islam who wants to catch out those with the same faith abusing its teachings for their own gains. Yet, to do so, he must perform questionable acts such as prepare bombs which will kill innocent victims, making him a terrorist himself. This juxtaposition of morals is the basis for the most taut moments in Traitor as you will Samir to be strong in the face of actions he must take if his mission is to succeed. Echoing his politically-charged Oscar-nominated performance in Hotel Rwanda, Cheadle makes Samir an awkward good guy forced to become trapped in a tangled web of politics if he is to succeed.

Cheadle ensures Traitor rises above a basic espionage thriller as Steve Martin and co-writer/director Jeffrey Nachmanoff give little for Pearce, Taghmaoui, McDonough or Daniels to say or do that doesn’t adhere to protocol for their organisations. Samir is the sole character given a hint of developing his own incentives or facing tough choices making for too many tired workmanlike scenes when attention turns to anyone but him. Despite this, Traitor does highlight the sacrifices which may have to be made in the pursuit of terrorists, and offers a hint of the way religious teachings can be used to fuel the actions of both sides at conflict.