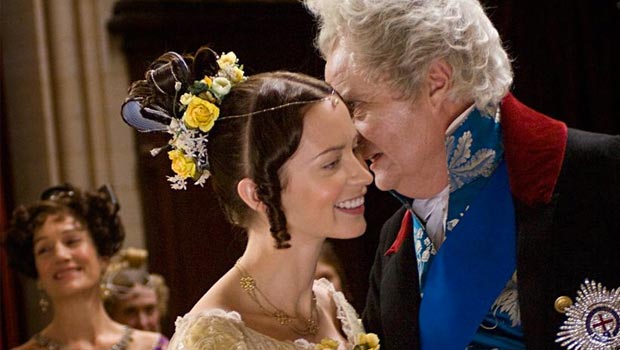 Summary: In the end, its workmanlike rather than brilliant; how much you enjoy it will probably depend on your tolerance for corsets, castles and carriages.

If your only image of Queen Victoria is a plump, grumpy old woman, dressed in widow’s weeds with a doily on her head, then The Young Victoria (Blunt) may come as something of a shock. Believe it or not, Queen Victoria was not actually born seventy years old. She, like all of us, was once a teenager, though few of us were heir apparent to the throne of England.

Her childhood is not enviable – Victoria is brought up by her widowed mother, the Duchess of Kent (Richardson), whose closest advisor is Sir John Conroy (Strong); the pair take control-freakery to a new level when they insist Victoria isn’t allowed to limb a flight of stairs without someone to hold her hand. How many people really die by falling down the stairs? But they also plan to run the country with the Duchess as Regent and Sir John as the power behind the throne as soon as Victoria’s uncle, King William IV (Broadbent), dies. This of course depends on him dying before Victoria’s eighteenth birthday; unluckily for them the regency doesn’t happen, and Victoria, on her succession, suddenly grows a spine with the help of the Whig Prime Minister Lord Melbourne (Bettany), who is always there to advise her.

Unfortunately Melbourne’s government is unpopular, and the young queen’s reputation is tarnished by association. Her uncle, King Leopold of Belgium (Thomas Kretschmann), is worried, and dispatches her young cousin, Prince Albert, to report back. Victoria is strongly attracted to Albert and, as the Queen, asks him to marry her, and despite their lack of privacy the two manage to conduct a passionate affair. Initially blissfully happy, Albert chafes under his marital inactivity; as prince consort he has no right to intervene in affairs of state and his role is basically ceremonial. Victoria, relishing her hard-won freedom and independence, is reluctant to give it up for anyone, even her beloved husband.

Like The Duchess before it, The Young Victoria seeks to shine a light on an historical subject and show how, despite the corsets and silly hair, in many ways nothing has really changed. The film is a bildungsroman and a love story; Victoria is struggling to find her place in the world, and step out from behind the men who seek to control her, or the power that she represents. She comes to realise that of them all only Albert is the one who really has her interests at heart; they are a match of equals and perfectly suited. Emily Blunt is marvellous as always, though far too good looking; Rupert Friend is adequate as Albert, and the rest of the cast, on a break from their Harry Potter roles, are all as fabulous as you would expect.

Julian Fellowes once again shows that noone knows the upper classes like he does, and throws in a bit of feminist outrage for topicality. In the end, its workmanlike rather than brilliant; how much you enjoy it will probably depend on your tolerance for corsets, castles and carriages. Who’s Queen?