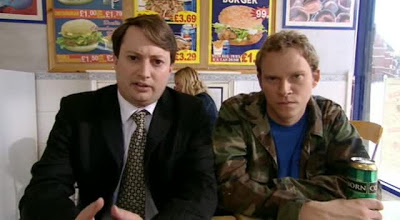 The return of the exemplary flatshare sitcom sees the show at the peak of its powers. With the possible exception of The Office, no other British sitcom has been so hilarious, edgy and relevant to life in the ‘Noughties’ (as nobody calls them).

The six episodes herein mark the continuing adventures of the mismatched flatmates and perennial losers Mark (Mitchell) and Jeremy (Webb). Mark is a character straight from the pages of a Kingsley Amis novel – a straight-laced and cynical Tory who copes badly in social situations. Jeremy on the other hand likes to think of himself as a free-spirited liberal, a man who dreams of musical stardom while devoting his life to incredibly lazy pursuits. Over the course of the series typical daily events include magic mushroom parties, jury duty and getting a friend sectioned, each storyline built up with such effortlessness that you wish writers Jesse Armstrong and Sam Bain would write all sitcoms ever made.

Peep’s Show ‘gimmick’ is that the camera views events from the eyes of its central characters, while inner monologues mark the sarcastic, embarassed or dim-witted thoughts that flit through their heads (often in direct contrast to the actions at hand). But this far down the line this stylistic device seems so natural (though still highly effective), that you barely consciously notice it all.

Like The Office and Friends, Peep Show partly succeed through having its own unique vernacular – a combination of sarcasm and uncertainty, a world where every sentence has a disclaimer of “sort of” or “maybe” attached. This voice helps Mark and Jeremy to come across as genuine and oddly likeable characters. The duo may border on the grotesque at times, but you can’t help but sympathise to their reactions to a world that’s by turns cruel, ridiculous and superficial. And the excellent Mitchell and Webb are backed up by some great comic playing from the likes of Olivia Colman, Sophie Winkleman and, of course, Matt King as the loveable drug-addled rogue Super Hans.

Peep Show is also a show that isn’t afraid to push its story forward during the course of a season – at least, as far as its characters can realistically progress. In Series 3 this takes the form of Mark and Sophie’s ongoing relationship (which is given a bit of a setback when Olivia secures a job in Bristol), and Jeremy’s doomed attempts to win back his ex-girlfriend ‘Big Suze’.

Every episode of Peep Show is a mini-masterpiece of social observation and squirm-inducing embarassment. If Men Behaving Badly had been given a coat of realism and actually been funny, it might have played something like this. An essential purchase for flatshares across the country.

A Peep at Magicians