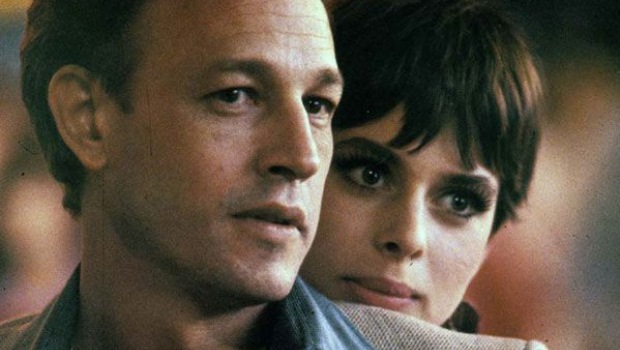 One From the Heart Review

Summary: A beautiful and intriguing failure.

And now for something a little easier… That’s what Francis Ford Coppola hoped for when he decided to make One From the Heart. After the intensely traumatic shoot of Apocalypse Now, the filmmaker changed tack with a simplistic romantic drama that would be shot entirely at his own American Zoetrope Studio. What could go wrong?

The result, of course, is perhaps more famous for being one of the decade’s biggest box office bombs than for the film itself. Coppola went widely over-budget, haemorrhaging money on the elaborate sets, and the film was a critical and commercial disaster. It seemed that Coppola just wasn’t destined for a stress-free life…

It’s not difficult to see why audiences stayed away. The story isn’t so much simplistic as non-existent. Hank (Apocalypse Now veteran Forrest) and Frannie (Garr) have been together five years. They argue. They sort-of split up on Independence Day. Hank hangs out with circus performer Leila (Kinski). Frannie is wooed by aspiring musician Ray (Julia). And that’s pretty much it for 100 minutes. There’s no narrative drive, no character depth, no plot twists, laughs or drama. It’s like the entire script has been a tragic victim of napalm in the morning.

At the same time, there’s no denying that One From the Heart is technically brilliant. The sets and costumes burst with colour and fizz with style. The camerawork is dizzying, Coppola’s Steadicam prowling up down and around characters, moving through doors, windows and apartments. And the editing is a joy, with exquisitely composed frames segueing into each other and superimposed scenes showing what Frannie and Hank are up to at the same time.

Coppola’s aim was to make an ornate Broadway-style musical – only instead of the characters singing, Tom Waits and Crystal Gayle’s Oscar-winning crooning plays over much of the action. There’s only really one big dance number, but it’s a spectacular one (choreographed by Michael Jackson’s This Is It and Moonwalker director Kenny Ortega), with cars and chorus girls joining Frannie and Ray as they shimmy through the Vegas Strip and spin around on lit-up floors.

Visually, too, One From the Heart is more of an old-school musical fantasy than a realistic depiction of Vegas or lost love. Coppola turns Vegas into one large hyper-stylised set – perhaps to suggest the artifice of the city or country as a whole; perhaps just because it looks, like, really, really pretty.

Yet Coppola fails to grasp that all the best musicals have at least some kind of story anchor and genuine heart at the centre of the songs and style, and his incredible visual panache isn’t enough to rescue One From the Heart from eventual tedium. But it’s a beautiful and intriguing failure, and every great director should be allowed a couple of those. Though that doesn’t excuse Jack…