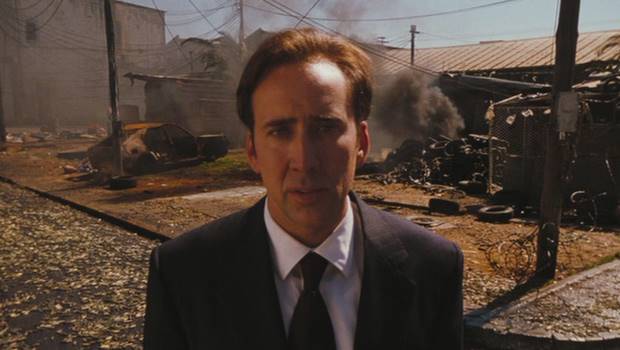 Summary: Lord of War is an intelligent slice of history on little know post cold-war dealings.

The film’s opening sequence tracks the path of a bullet, from its manufacture in Russia; sales and distribution to armed militants; to its final resting place: the skull of a young African child. Also possibly a metaphor for out lead protagonist’s character – Purveyor of wanton death and destruction, or salesman without conscience??

Cage plays bored Ukrainian (parading as a Jew..) Yuri Orlov in New York’s Little Odessa, with his quirky hard-working parents, and subtly more disillusioned sibling Vitaly [Leto]. He realises there must be more to life, and he knows he’s destined for greater things.. On encountering a murder, he realises it’s the instrument of all things morbid – guns, and ammunition that are his calling. He begins to trade AK-47’s and Kalashnikoff’s as if he were swapping Pokemon cards in a school playground. Soon enough he reaches unfathomable heights (a-la-Scarface) and has links with practically every despot, tyrant, dictator and head of defence in the known, and yet to be discovered world.

As Orlov matures he slowly comes to terms with the lunacy, and insane state of affairs regards arms trading, its repercussions, and the torrid characters he has to deal with. Yet after a point it seems to have got the better of him. Added to this he has Interpol agent Jack Valentine [Hawke] and sinister arms extraordinaire Simeon Weisz [Holm] trying to light a fire up his… Though trading on the lives of others in the deadliest of war zones, his conscience finds a balance.. of sorts.. and works with it. But when it begins to impact on wife [Moynahan] and brother, his inner crisis manifests itself with harrowing results.

Coming from the writer of the measured and utterly brilliant Gattaca, and clever (and a tad melodramatic) Truman Show, Lord of War is a well structured fable, given the Niccol treatment. He’s previously ripped apart celebrity, vanity and bureaucracy, and here again he seems to be highlighting a pessimism for the future, with grey-tinted view on society as we know it. This being a true story, he is simply stating facts. A blitzkrieg of them, as Cage in charismatic voiceover tells us anything and everything there is to know about Uzi’s and MI-16’s… It’s fully-loaded with an encyclopaedic fact file on ammunition utilised on everything from the Crimean War to present day African dictators. If only Mastermind was still running.

Performance-wise Cage is superlative as dis-affected salesman Orlov. His myriad personality (those insane nervous twitches, and his impervious rancid gaze) make us believe in his character. It isn’t thankfully another Nick Cage painting by the numbers action humdinger. On the contrary it does have ‘added intelligence’, and we do feel an empathy for our morally ambiguous warlord. Hawke is wasted, Holm is scary, and Leto is getting increasingly typecast as a wayward junkie. Time to change agent methinks.

Lord of War is an intelligent slice of history on little know post cold-war dealings. It asks a lot of questions, points even more fingers, and gives a small insight into how $32 Billion disappeared – seemingly without trace. It’s far from predictable in its approach, and the end result is satisfying yet quite frankly.. ambiguous on a number of levels. A dark satire on the world of warfare, it’s thought-provoking without actually taking sides. It quite simply states: Ammunition, Defence, Guns – You decide.