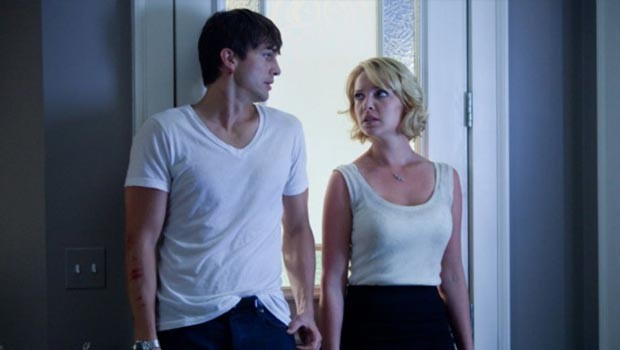 Summary: The leading pair work well together and are enjoyable to watch making for a light distraction that will satisfy an undemanding audience.

Using True Lies as inspiration, aloing with a dash of Mr & Mrs Smith too, Killers sees Ashton Kutcher and Katherine Heigl paired up as a married couple living in bliss until the shady past of husband Spencer Aimes (Kutcher) catches up with him. The one-time undercover government spy suddenly faces assassins wherever he turns, much to the surprise of wife Jen (Heigl), in what is a fluffy but harmless action comedy.

Killers plays is almost perfectly pitched to its target audience. The opening scenes quickly establish Jen as a desperate and newly-dumped singleton holidaying with her parents (an amusing alcoholic mother played Catherine O’Hara and father Tom Selleck at his most deadpan) who are keen for her to be hook up with a new man. Enter a half naked Kutcher who she bumps into at her hotel and then follows her all the way to the beach for that crucial first flirt. So far, so romantic comedy. Spencer looks to be the perfect catch – sports car, good looking and funny – however the real reason he’s in Nice is to bump off an enemy as instructed by his superior. While sweeping Jen off her feet, as well as using a few special moves on a sleazy dancer who tries to steal her away, Spencer completes his mission, pledges his heart to Jen and quits the spy game to live happily ever after… or so he hopes. Fast forward three years later on his birthday weekend and Spencer is called up for one last job he can’t take on, resulting in a $20 million bounty on his head and time for a little on-the-run marriage counselling as he and Jen fend off the bad guys.

While Kutcher and Heigl make for a sickly sweet pairing and the script is littered with cringe-worthy romantic one-liners at the start, when the guns come out Killers transforms from a laboured rom com into a fun actioner. Kutcher plays the suave spy well, but shines when his prowress at killing people is undermined when dealing with very real issues such as in-law etiquette, being good to his wife and juggling his secret past. Equally Heigl’s moans to her girlfriends about her husband’s apparent “third year slump” could have been lifted from any sitcom, yet she revels in arguing over the intricacies of married life while dodging bullets. Though Killers can’t quite True Lies on scale and lacks the punch of Mr & Mrs Smith, the leading pair work well together and are enjoyable to watch making for a light distraction that will satisfy an undemanding audience.