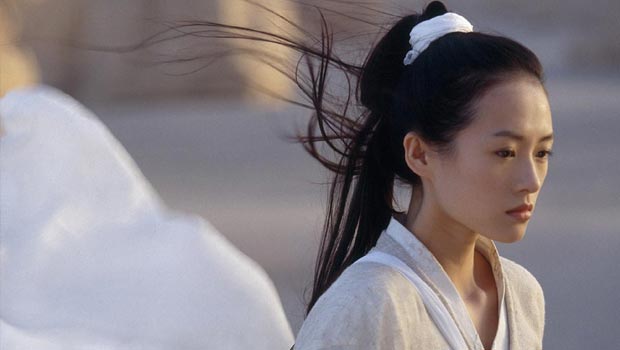 Summary: My initial impression was that it was not as moving as Crouching Tiger, though more aesthetically pleasing.

In the 3rd Century B.C., China is divided into seven warring kingdoms, fighting
ruthlessly amongst themselves for supremacy. The Kingdom of Qin is the most determined of all, its ambitious King (Chen Daoming) obsessed with conquering China and becoming her first emperor. As a result, he is the target of a number of assassins from the other kingdoms, including the legendary Broken Sword (Tony Leung Chiu Wai), Flying Snow (Maggie Cheung Man Yuk), and Sky (Donnie Yen). The King offers a huge reward to anyone who could defeat the three assassins, but for ten years no one comes close, until the enigmatic Nameless (Jet Li) arrives at the palace bearing the weapons of slain assassins.

Nameless is granted the privilege of a private audience with the King, and
tells theup extraordinary tale. The King hangs on his every word, but when he
finishes, something unexpected happens. The King tells his version of events,
which contradicts Nameless’ story. Which version is the truth?

First of all, everything you’ve heard about Hero’s beauty is true. The
film is exquisite. The costumes, the colour palate, the cinematography ­
there is so much on the screen to just gape at in awe. Each segment has a different
colour theme: the King’s palace is black, with touches of white and red;
Nameless’ story is red; the King’s version blue, the third section white and
intercutting with these a further set of green flashbacks. The colours reflect
the way that each story is being told from a different perspective, but are
also simply beautiful.

In one scene, where Flying Snow fights with Moon (Zhang Ziyi), Broken Sword’s
faithful servant, their red robes whirl and spin against the background of a
golden forest. Flying Snow uses the falling leaves as another weapon and when
she defeats and kills Moon, the entire scene turns red. It’s hard to explain
how awesomely lovely it is. The performances are uniformly excellent, and the
beauty of the cast is part of the sheer gloriousness of the whole. Zhang Yimou
and Christopher Doyle have succeeded in creating a visual masterpiece.

And its quite brutal. Though the fights are balletic and light, there’s
no doubt that these are real fights, in which people die. But that’s not
what you’ll remember. What lingers in the mind: watching Nameless and Broken
Sword fighting on an ice-blue lake, dipping in and out of the water like herons,
the camera sometimes filming the scene from beneath the water. Or Broken Sword
attacking the King in his throne room hung with billowing green silk curtains.
Maggie Cheung’s tiny waist in her kimono. Broken Sword and Moon making love
under a vast, beetroot coloured sheet.

I need to go and see Hero again, because I was so overwhelmed by the spectacle
that I felt a little bit numbed to the story. Between gawping at the screen
and trying to keep up with the subtitles, I didn’t take it all in. The three-act
structure, told in a series of flashbacks, is a bit confusing and I was glad
of the colour coding. My initial impression was that it was not as moving as
Crouching Tiger, though more aesthetically pleasing. I’m looking forward to
watching it a second time.