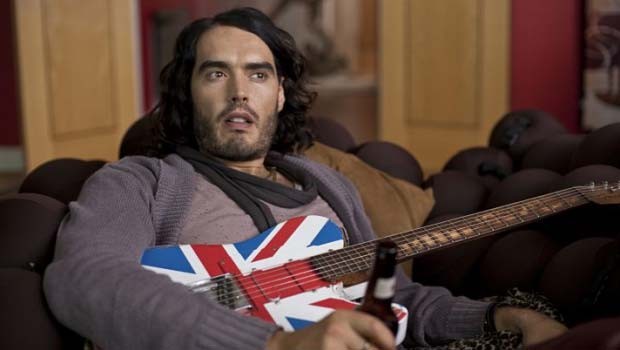 Get Him To The Greek Review

Russell Brand reprises his role at rock superstar Aldous Snow from Forgetting Sarah Marshall in this spin-off sequel which teams him up with one of the current comic kingpins Jonah Hill – a man who has been making astute decisions to build on his successful inauguration into high profile Hollywood comedies with Superbad. This time the focus is on Aldous as Brand uses his own badboy status to ramp up his on-screen persona as a rock star who can’t be tamed. Bumbling music label executive Aaron Green (Hill) is charged with collecting him from London, and getting him across the Atlantic to a gig at The Greek Theatre in Los Angeles. This simple plot is fleshed out with knowing winks to the music industry and celebrities galore to ensure the little mishaps keeping Aldous from the Greek are anything but getting stuck in traffic or forgetting a plane ticket.

Before Green is asked to collect Snow, we’re painted a picture of a rock star in decline. Single “African Child” was a PR nightmare: a song written to highlight poverty that proved unpopular with fans and critics alike as it appeared racist and self-indulgent. Now a relic of pop past, it takes his 10th anniversary of a seminal performance at The Greek for record executive Green to suggest to his label boss Sergio Roma (a tongue-in-cheek Sean “Diddy” Combs) it would be a way of injecting some life into the struggling business. It’s a canny take on the situation of the music world today: live performance has become the main source of income for artists and labels while aging acts are unearthed for tours to use the nostalgia factor to fill venues. The character of Snow has all the hallmarks of a fallen icon too: his wife, Jackie Q (Rose Byrne) has divorced him and made a name for herself as a solo artist while he continues to party away with little care for recreating his creative past. This leaves Green with a problem: how we he convince Snow to leave the safe-haven of London with an endless supply of sex, drugs and alcohol in favour of getting on stage to erase the demons of “African Child” that effectively ended his career?

Green is given a hard time with Snow – and just has to go with it. As a man who doesn’t stand up for himself against his own girlfriend and lacks respect in the music business, Green’s not in much of a position to argue when Snow’s persistent desire to party takes precedent over getting on a plane. Soon Green is downing the drinks and getting the attention of the ladies – though he faces a race against time as much as himself to get Snow on stage on time.

Hill and Brand are paired together perfectly here – and the key element of their success is the close fit with their roles. Brand has lived the hedonistic lifestyle of Snow so replicates his party experiences on screen, no doubt bolstering it with a few references to his rock star friends he hangs out with on the party scene. The result is a believable as well as funny insight into the VIP world. Hill’s natural awkwardness echoes through his performance as Green, a fish out-of-water alongside Snow in his non-stop lifestyle, making for plenty of laughs at his inability to deal with the debauchery. Though there is a degree of predictability about their high jinks after the first few parties, Get Him To The Greek picks up again when Snow arrives in the States and demands to seek out his parents – something that has label boss Sergio on red alert and Combs does a fine job of putting a little of himself into the role. This is Brand and Hill’s film though, and by ensuring there are references to the music industry and its stars throughout – with many making cameo appearances – Get Him To the Greek is a superior follow-up to Forgetting Sarah Marshall.