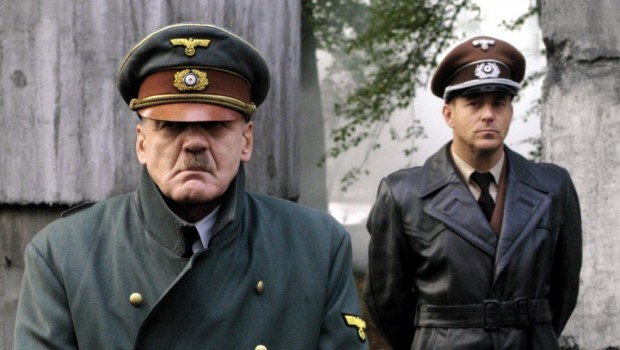 Summary: Downfall is one of the most intelligent and compelling films of the year so far.

By April 1945 everything was falling apart for the Third Reich. In the skies the Luftwaffe were all but finished, and on the ground battalions everywhere were falling as the Russians steadily closed in on a heavily shelled Berlin. Against this backdrop we find Adolf Hitler (Ganz) refusing to heed the advice of his confidantes to leave Berlin, insisting on remaining until the bitter end. Instead he takes to an underground bunker under the Chancellery along with mistress Eva Braun, stenographer Traudl Junge and several of his closest aides. From this position Hitler dismisses any notion of defeat for the ‘Fatherland’, instead barking impossible orders to his generals as the Russians edge ever closer.

The very nature of the doomed, claustrophobic timeframe meant that Downfall was always going to be a gripping movie. Yet director Hirschbiegel – who gave us the almost-as-impressive The Experiment – makes sure that this is more than simply a study of Hitler’s final days, and he skillfully interweaves the pressured claustrophobia of the bunker with the helpless despair on the streets outside. This is as much a movie about Berlin’s final days as Hitler’s, and the film eerily captures the air of insanity that haunts the city. Soldiers drunkenly drown their worries, wild parties spin in ballrooms as bombs fall outside, old men are dragged from their beds and hung in the street as ‘traitors’ and nobody is quite sure what lies next for their country.

The movie is nominally seen through the eyes of Hitler’s naïve secretary Junge (Lara) who has become attracted by Hitler’s magnetic personality cult, but the film finds time to draw in several other characters to give different impressions of life in the dying city. We see a 13 year old boy, Peter, sucked into the Hitler Youth much to his father’s horror; we see a weary doctor patrolling the streets of Berlin who attempts to help wounded soldiers and civilians in forgotten corners of the city and we see the pressures and concerns of the figures that float around Hitler’s periphery. Downfall manages to skillfully incorporate the machinations of politics in the run up to defeat, with Hitler finding some of even his closest allies deserting or double-crossing him.

While it may not be a film solely concerned with Hitler, at Downfall’s core lies an astonishing performance from Swiss actor Ganz (The Manchurian Candidate), veering between softly spoken certainty and wild bursts of fury with a strange lucidity. It takes a lot to make such a well-known figure convincing, but Ganz isn’t afraid to bring to life every conflicting aspect of Hitler’s personality. It was accusations of ‘humanising Hitler’ that saw the film become the center of a great deal of controversy when released in Germany last year. Certainly it does make Hitler a human rather than a simplistic emblem for evil itself; we see him as a complicated multi-layered man capable of moments of charm and gentleness as well as rage and hate. As Hirschbiegel has said, it is precisely the fact that Hitler was a man that makes the facts much more horrifying. But with lines like “compassion is a weakness” and his matter-of-fact pride in the persecution of the Jews this is no apology for Hitler, and the film never underestimates his egocentric, callous nature that is fuelled by the destructive hatred Nazism was built on. Even as the end draws near Hitler refuses to admit any part in Germany’s (and National Socialism’s) failure – he blames his generals, he blames the soldiers and he blames the German people themselves. “If the war is lost, then it is of concern to me if the people perish in it” Hitler proclaims, his disregard for the destruction of his own people managing to shock even his closest aides.

Ganz is backed up by a selection of electrifying performances that bring other infamous names of the period to life including Matthes as an appropriately gaunt, quietly terrifying Joseph Goebbels and Harfouch as Goebbel’s wife Magda whose maternal tenderness disturbingly jars with her refusal to let her children grow up in a world without National Socialism. Then there is Eva Braun, played with charismatic verve by Kohler, whose jovial, hedonistic figure seems the very antithesis of Hitler’s somberness – yet whose support for him never once wavers. A combination of persuasive performances and Hirschbiegel’s vivid attention to detail help to make Downfall an entirely convincing study of a particular moment in history.

For anyone not intimately familiar with the background and names within the upper echelons of The Third Reich, the coming and goings of so many characters in Downfall can be a little confusing at times; yet the film avoids becoming unnecessarily convoluted. Here is a German film bold enough to face its country’s history head on without the need to sanitise or reduce figures to cheap stereotypes to convey its power. As both a history lesson and a knife-edge thriller, Downfall is one of the most intelligent and compelling films of the year so far.